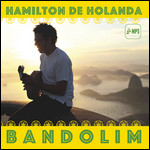 Hamilton de Holanda is a Brazilian bandolinist known for his mixture of choro and contemporary jazz, and for his instrumental virtuosity. Born in Rio de Janeiro he moved to Brasilia with his family as a boy. He started playing the mandolin at 5 and appeared at his first performance at six. With his brother Fernando César he formed the group Dois de Ouro and throughout his career he has collaborated with many other significant artists such as Yamandu Costa,[1] Mike Marshall[2] and Joel Nascimento. He has received several Latin Grammys. He has taught at the Raphael Rabello Choro academy.[3][4] He plays a custom made 10 string Bandolim.[5][6][7]

This article uses material from the article Hamilton de Holanda from the free encyclopedia Wikipedia and it is licensed under the GNU Free Documentation License.

Because Of You Black Mountain Blues Band
Update Required To play the media you will need to either update your browser to a recent version or update your Flash plugin.