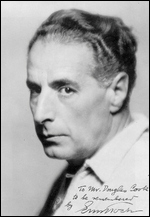 Ernst Toch (German pronunciation: [tx]; 7 December 18871 October 1964) was an Austrian composer of classical music and film scores. He sought throughout his life to introduce new approaches to music.

Toch was born in Leopoldstadt, Vienna, into the family of a humble Jewish leather dealer [1] when the city was at its 19th-century cultural zenith. He studied philosophy at the University of Vienna, medicine at Heidelberg and music at the Hoch Conservatory (1909-1913) in Frankfurt.[2] His main instrument was the piano, and he was a pianist of real stature, performing to acclaim throughout much of western Europe. Much of his writing was intended for the piano.

Toch continued to grow as an artist and composer throughout his adult life, and in America came to influence whole new generations of composers. His first compositions date from c. 1900 and were pastiches in the style of Mozart (quartets, 1905 album verses for piano). His first quartet was performed in Leipzig in 1908, and his sixth (Opus 12, 1905) in the year 1909. In 1909, his Chamber Symphony in F major (written 1906) won the Frankfurt/Main Mozart prize. From this time onwards, Toch dedicated himself to being a full-time composer. He won the Mendelssohn prize for composition in 1910. In 1913, he was appointed lecturer of both piano and composition at the College of Music in Mannheim. After winning a further five major prizes for his works, he served four years in the army on the Italian Front during World War I. In 1916, he married Lilly Zwack, the daughter of a banker.

After World War I, he returned to Mannheim to compose, developing a new style of polyphony. He received his Ph.D. degree from Heidelberg University in 1921. He then taught on the faculty of the Mannheim Conservatory where one of his pupils was Hugo Chaim Adler.

Following Hitler's seizure of power in 1933, Toch went into exile, first to Paris and then London, where he wrote film scores. In 1935, he accepted an invitation from the New School for Social Research to go to New York. He could, however, only secure his living in California by composing film music for Hollywood. Unlike his colleague Erich Wolfgang Korngold, however, Toch never got much attention in the industry and was rarely top-billed. His score for the chase scene in Shirley Temple's 1937 Heidi perhaps remains his best-known piece of film music.

During his residence in California, he was a professor at the University of Southern California, where he taught both music and philosophy. He was also a guest lecturer at Harvard University. He wrote a book on music theory, The Shaping Forces in Music (1948). From 1950 on, he composed seven symphonies, the third of which (Opus 75, 1954) received the Pulitzer Prize three years later. In these later works, he returned to the late Romantic style of his early years.

In 1958, he received the Order of Merit of the Federal Republic of Germany (Grand Merit Cross).

He died in Santa Monica, California, and was interred in the Westwood Village Memorial Park Cemetery in Los Angeles. He is the grandfather of authors Lawrence Weschler and Toni Weschler.

His works often exhibit a humorous aspect (Bunte Suite (1929)). In 1930 he invented "Gesprochene Musik," the idiom of the "spoken chorus". His most performed work is the Geographical Fugue or Fuge aus der Geographie, which he himself regarded as an unimportant diversion. He wrote music for films, symphonies, chamber music, chamber operas. He also wrote books dealing with musical theory: Melodielehre (1923) and The Shaping Forces in Music (1948).

Toch was considered one of the great avant-garde composers in the pre-Nazi era. He won the Pulitzer Prize for Music in 1956 for his Third Symphony (premiered by the Pittsburgh Symphony Orchestra on December 2, 1955). His notable students include Richard Wernick, André Previn, and Mel Powell.

All incidental music listed is unpublished except Das Kirschblütenfest (pub. 1927).

This article uses material from the article Ernst Toch from the free encyclopedia Wikipedia and it is licensed under the GNU Free Documentation License.