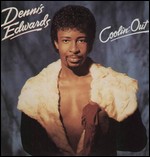 Dennis Edwards (born February 3, 1943) is an American soul and R&B singer, notably a lead singer in The Temptations, on Motown Records. Edwards joined the Temptations in 1968, replacing David Ruffin and sang with the group from 1968 to 1976, 1980 to 1984 and 1987 to 1989. In the mid-1980s, he attempted a solo career, scoring a hit in 1984 with "Don't Look Any Further" (featuring Siedah Garrett). Today he is the lead singer of The Temptations Review featuring Dennis Edwards, a Temptations splinter group.

Edwards was born in Fairfield, Alabama,[1] about eight miles from Birmingham, to Reverend and Mrs. Dennis Edwards Sr., He began singing as a toddler, just two years old, in his father's church. The Edwards family moved to Detroit, Michigan when Edwards was about ten years old, and Edwards would continue to sing in the church pastored by his father, eventually becoming choir director.[2]

As a teenager, Edwards joined a gospel vocal group called The Mighty Clouds of Joy, and studied music at the Detroit Conservatory of Music.[2] He was disallowed to sing or listen to secular music at home, and his mother disapproved when he began pursuit of a career singing rhythm and blues music.[2] In 1961 he organized his own soul/jazz group, Dennis Edwards and the Fireballs.[3] In 1961,[4] Edwards recorded a single for the obscure Detroit label, International Soulville Records, "I Didn't Have to (But I Did)" b/w "Johnnie on the Spot".[3]

Following time served in the US military, in 1966 Edwards auditioned for Detroit's Motown Records, where he was signed but placed on retainer. Later that year, he was assigned to join The Contours after their lead singer fell ill.[2] In 1967, the Contours were the opening act for several Temptations concerts, and Temptations members Eddie Kendricks and Otis Williams - who were considering replacing their own lead singer, David Ruffin (who was a personal friend of Edwards[5]), took notice of Edwards and made his acquaintance.[2]

Later in 1967, Edwards quit the Contours and was placed back on retainer.[2] He attempted to get a release from his contract, as Holland-Dozier-Holland had promised to sign him to their new Invictus Records, but was drafted in late June 1968 to join the Temptations, who had just fired Ruffin from the act.[2][6]

Ruffin had tipped Edwards off that he was being drafted as his replacement, which eased Edwards' conscience in replacing him.[2][6][7] The Temptations officially introduced Edwards on July 9, 1968 on stage in Valley Forge, Pennsylvania. However, Ruffin, who was attempting to make his way back into the group, crashed the stage during Edwards' lead vocal on "Ain't Too Proud to Beg" to significant applause.[6] He continued similar stunts for about a month until, according to Edwards, the group decided to lay-off Edwards - with the promise of a solo deal from Motown - and rehire Ruffin.[6] When Ruffin failed to show for his return engagement in Gaithersburg, Maryland the next night, Edwards was permanently kept on and the Temptations refused to entertain rehiring Ruffin any further.[6]

During this time, Edwards was engaged to Yvonne "Frankie" Gearing, the lead singer of Quiet Elegance, and The Temptations toured with them as their backing group.

Edwards remained in the Temptations until being fired by Otis Williams in 1977 just before the group's departure from Motown to Atlantic Records. After a failed attempt at a Motown solo career, Edwards rejoined the Temptations in 1980, when they returned to Motown.[3] In 1982, Edwards got the chance to sing with Ruffin and Eddie Kendricks as part of the Reunion album and tour. Edwards began missing shows and rehearsals, and was replaced in 1984 by Ali-Ollie Woodson.

In 1989, Edwards was inducted into The Rock and Roll Hall of Fame as a member of The Temptations.[8]

Motown re-launched Edwards' solo career, in 1984 with the hit single "Don't Look Any Further," a duet with Siedah Garrett.[3] The album of the same name reached No. 2 on the R&B charts and included the radio singles "(You're My) Aphrodisiac" and "Just Like You."[9] The 1985 follow-up album Coolin' Out included the title track, an R&B Top 30 hit; and "Try A Little Tenderness."[10] When problems arose between Woodson and the Temptations in 1987, Edwards was brought back once again, but was himself replaced by Woodson in 1989 after being fired a third and final time by Williams.

Edwards toured and recorded with fellow ex-Temptations Ruffin and Kendricks during the late 1980s as 'Ruffin/Kendricks/Edwards, former leads of The Temptations', although nothing was released.[3] The 1998 "Street Gold" DVD "Original Leads Of The Temptations" documents this historic period.[11] After the deaths of Ruffin (1991) and Kendricks (1992), Edwards was forced to wrap up the project alone. In 1990 Dennis teamed up with Eddie Kendricks to release a dance/club track for A&B records entitled "Get it While it's Hot". The track was recorded at Fredrick Knight's recording studio in the duo's old home town of Birmingham, Alabama and produced and engineered by house music pioneer Alan Steward. The track created a lot of controversy as it contained a short rap sequence which did not sit very well with die hard Temptations fans. Edwards' Don't Look Any Further the Remix Album was released in 1998 containing updated dance mixes and the original 1984 track.

Edwards was portrayed by Charles Ley in the 1998 biographical television mini-series The Temptations, though he was not heavily focused upon, as the mini-series gave more attention to the Ruffin/Kendricks-era Temptations line up.

Dennis Edwards was briefly married to Ruth Pointer, whom he wed in Las Vegas in 1977.[12] The couple has one daughter, Issa Pointer, who later became a member of her mother's vocal group The Pointer Sisters.

This article uses material from the article Dennis Edwards from the free encyclopedia Wikipedia and it is licensed under the GNU Free Documentation License.

Isabelle Double Version
Update Required To play the media you will need to either update your browser to a recent version or update your Flash plugin.