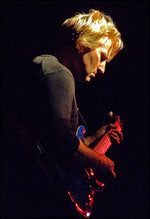 Brett Garsed is an Australian guitar player. He plays with, among others, John Farnham and T. J. Helmerich and is a former member of the band Nelson. Garsed was featured on Derek Sherinian's debut solo release Planet X (1999) and Planet X's Quantum (2007), and more recently Molecular Heinosity (2010).

Brett Garsed was born in rural Victoria, Australia and began playing guitar at age 12 after hearing Deep Purple's Ritchie Blackmore play "Speed King". After about a month of initial lessons he continued to teach himself and formed a band composed of his two cousins and a mutual friend and began playing live.

In July 1985, Brett was featured in Guitar Player magazines Spotlight column, which was devoted to exposing new talent to the rest of the world. This encouraged Brett to give up his job as a licensed plumber and pursue a career as a professional musician, prompting him to send demo tapes to as many record companies and management companies as he could find. I wasnt looking for a record deal. I just wanted to get into a good band. One of the tapes was heard by Ross Fraser of the Wheatley Organization, which led to an audition for a short tour by Australian superstar John Farnham. Farnham, at this time still a member of the Little River Band, was planning a solo album and invited him to be a part of the project. The resulting album, Whispering Jack, went on to become the biggest selling album in Australian history, followed by sellout tours of Australia and Europe.

Garsed continued to tour and record with Farnham until early 1989 when he was invited to the US to audition for Nelson, a band led by Gunnar and Matthew, sons of the late Ricky Nelson. The audition was a success and the resulting album, After the Rain, went on to sell in excess of three million copies and yielded a national #1 ('Love and Affection') as well as two Top Ten follow-up singles. In early 1990 Brett also recorded Centrifugal Funk for Mike Varney's label Legato Records, an intense guitar album featuring Frank Gambale and Shawn Lane.

For most of 1991 Garsed toured the US with Nelson, and spent 92 recording Quid Pro Quo with Chicago-born guitarist T J Helmerich after the duo decided to sign to Varneys label. With Nelson on a seemingly permanent hiatus, Brett and TJ pursued their career promoting Quid Pro Quo, which featured Bobby Rock on drums, Gary Willis on bass and Paul Mirkovich on keys. Greeted with critical acclaim worldwide, the pair recorded the follow-up album Exempt in 1993. In 1996 Bobby Rock released Out Of Body, a progressive rock album featuring Brett on guitar.

In 1994 Garsed also filmed an instructional video for REH/Warner titled Rock Fusion which covers, in detail, his unique approach to guitar improvisation.

Garseds most recent recording projects include the Uncle Moes Space Ranch album featuring TJ Helmerich, Gary Willis, Dennis Chambers and Scott Kinsey, the Tapestry album which was released under the band name Mojo and features Ric Fierabracci on bass and Kofi Baker, son of Ginger Baker on drums, and more recently his debut solo album Big Sky with Fierabracci returning for bass and production duties and Toss Panos behind the drums.

Brett returned to Australia after 14 years in Los Angeles and completed the seven-month-long Last Time tour with John Farnham. His first solo album, Big Sky, was released in 2002. After nearly a decade, he followed this up with Dark Matter in 2011. In 2004, Rock Guitar Improvisation, his second instructional DVD was released covering many aspects of his technique. This DVD also included some live footage.

Garsed is mainly an improviser guitarist, renowned for his legato and hybrid picking technique, a combination that provides him with an extremely fluid sound to his playing. He has also mastered a distinctive slide guitar sound, specially noticeable in his latest releases.

Rather than relying on scale patterns and figures, he's stated to play with a relative pitch approach, that allows him to play the melodies in his mind. A fundamental component of his music is the use of wide intervals and chromatic passing tones.

This article uses material from the article Brett Garsed from the free encyclopedia Wikipedia and it is licensed under the GNU Free Documentation License.

A Flower Is A Lovesome Thing Enrico Pieranunzi, Marc Johnson, Joey Baron
Update Required To play the media you will need to either update your browser to a recent version or update your Flash plugin.