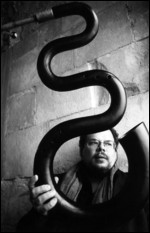 born in 1960 in Héricourt, Franche-Comté, France

Godard was admitted at the age of 18 to the Philharmonic Orchestra of Radio-France. His ability to produce overtones ("multiphonics") and musicality leaves the listener surprised at how light a seemingly cumbersome tuba can sound. In 1979 he picked up also the ancestor of the tuba, the serpent.

On the classical side, Michel Godard played since 1988 with the Radio France Philharmonic Orchestra, the French National Orchestra, the Ensemble Musique Vivante, and, recently, the ancient music Ensemble La Venice and "XVIII-21Musique de Lumieres". He was also a member of the "Arban Chamber Brass" quintet (notably touring Japan, the U.S., Africa) and interprets works from the solo repertory, too. He gives international master classes.

As a composer, Michel Godard was commissioned by Radio France, Donaueschingen Music Festival and French Ministry of Cultural Affairs.

Michel Godard also played and recorded with the pipeband of the Brittany town Quimper, with reggae star Alpha Blondy and with Canterbury rock musicians John Greaves and Pip Pyle.

This article uses material from the article Michel Godard from the free encyclopedia Wikipedia and it is licensed under the GNU Free Documentation License.

Betty Off Course Featuring Erik Truffaz
Update Required To play the media you will need to either update your browser to a recent version or update your Flash plugin.