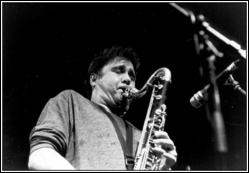 Louis Sclavis (b. Lyon, France, February 2, 1953) is a French jazz musician. He performs on clarinet, bass clarinet, and soprano saxophone in a variety of contexts, including jazz and free jazz. He is noted for his creativity and lively sense of humor.

Sclavis began his musical education at the conservatoire de Lyon at age 9, where he studied clarinet. He began performing with the Lyon Workshop, where he met Michel Portal and Bernard Lubat. He then joined the Brotherhood of Breath of Chris McGregor, and later the Henri Texier Quartet.[1]

He began his work as a leader in 1985, with his debut album, Clarinettes. In Chine, his second album, the track "Duguesclin" actually became a surprise hit in France, due to its lively, middle-age inspiration. In 2005, he formed a trio with Henri Texier and Aldo Romano, the African Trio, which achieved considerable success, even outside of the French jazz community. In November 2006, at the Festival 'Écouter Voir' in Lyons, Sclavis first met the Quatuor Habanera, with whom he collaborated on their third album, L'engrenage (2007).

He frequently performs with the cellist Ernst Reijseger and was one of the first to combine jazz with French folk music, working most prominently with the hurdy-gurdy player Valentin Clastrier.

In 2010 Roberto Tardito dedicated his album Distanze to him.

This article uses material from the article Louis Sclavis from the free encyclopedia Wikipedia and it is licensed under the GNU Free Documentation License.