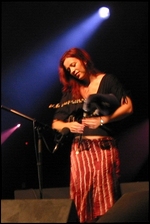 Kathryn Tickell (born 8 June 1967) is an English player of the Northumbrian smallpipes and fiddle.[1] She has recorded over a dozen albums, and toured widely.

Tickell took up the smallpipes aged nine, inspired by her familyespecially her father Mike, who was heavily involved in the local traditional music sceneand by the music of an older generation of traditional musicians such as Willie Taylor, Will Atkinson, Joe Hutton, Richard Moscrop, Billy Pigg and Tom Hunter. By the time she turned thirteen in 1980, Kathryn had won all the traditional open smallpipes competitions, and was also making a name as an accomplished player of the Shetland fiddle style which she learned from the Shetland fiddle master Tom Anderson at Stirling University's traditional folk summer school.[2] Tickell has also incorporated the Border pipes into her traditional ensemble.[3] Her family is from the North Tyne Valley area of Northumberland.[1]

Her first album, On Kielder Side, was released in 1984. In the same year she was named the official piper for the Lord Mayor of Newcastle-upon-Tyne.

Tickell turned professional in 1986. She has since toured Europe regularly and has recorded with international performers such as The Chieftains, The Boys of the Lough, and Sting.

In 1990 she formed the Kathryn Tickell Band. As of 2005, the band consisted of her brother Peter Tickell (fiddle), Julian Sutton (melodeon), Ian Stephenson (guitar, acoustic bass guitar), and herself (Northumbrian pipes and fiddle).

Two ex-members of the north-eastern traditional music group the High Level Ranters have appeared on her albums: Tom Gilfellon on On Kielder Side and Alistair Anderson on Borderlands (1986). The latter album included to a tribute to Wark football team.

Several other pipers have appeared on her albums: Troy Donockley on Debatable Lands, Patrick Molard on The Gathering and Martyn Bennett on Borderlands. Debatable Lands included "Our Kate", a composition by Kathryn Tickell dedicated to Catherine Cookson. Jazz saxophonist Andy Sheppard wrote a piece with her in 2001. It was premiered at the opening of the Gateshead Millennium Bridge.

In 2002 Tickell became director of "Folkestra North", a project to develop young talented musicians, aged between 14 and 19.

This article uses material from the article Kathryn Tickell from the free encyclopedia Wikipedia and it is licensed under the GNU Free Documentation License.