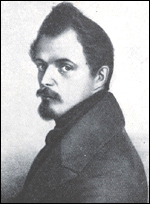 Henselt was born at Schwabach, in Bavaria. At the age of three he began to learn the violin, and at five the piano under Josepha von Fladt. On obtaining financial help from King Ludwig I of Bavaria he went to study under Johann Nepomuk Hummel in Weimar for some months, and thence in 1832 to Vienna, where, besides studying composition under Simon Sechter (the later teacher of Anton Bruckner), he made a great success as a concert pianist.

In order to improve his health he made a prolonged tour in 1836 through the chief German towns. In 1837 he settled at Breslau, where he had married Rosalie Vogel, but in the following year he migrated to Saint Petersburg, where previous visits had made him persona grata at Court. He then became court pianist and inspector of musical studies in the Imperial Institute of Female Education, and was ennobled in 1876. He usually spent his summer holidays in his former homeland Germany. In 1852 and again in 1867 he visited England, though in the latter year he made no public appearance.

Saint Petersburg was his home practically until his death, which occurred during a stay at Warmbrunn, Germany (now in Poland), due to cardiac disease. The characteristic of Henselt's playing was a combination of Franz Liszt's sonority with Hummel's smoothness. It was full of poetry, remarkable for the great use he made of extended chords, and for his perfect technique. Indeed, his cantabile playing was unequalled: Liszt once commented on the lengths to which Henselt had gone to achieve his famous legato, saying, "I could have had velvet paws like that if I had wanted to." Henselt's influence on the next generation of Russian pianists is immense. It is in Henselt's playing and teaching that the entire Russian school of music had its genesis, developing from the seeds planted by John Field. Sergei Rachmaninoff held him in very great esteem, and considered him one of his most important influences.

He excelled in his own works and in those of Carl Maria von Weber and Frédéric Chopin. His Piano Concerto in F minor, Op. 16[1] was once frequently played in Europe; and of his many valuable studies, Si oiseau j'étais was very familiar. At one time Henselt was second to Anton Rubinstein in the direction of the Saint Petersburg Conservatory.

However, despite his relatively long life, Henselt ceased all composition by the age of thirty. The reasons are unclear. Chronic stage fright, bordering on paranoia, caused him to withdraw from concert appearances by age thirty-three.

This article uses material from the article Adolf von Henselt from the free encyclopedia Wikipedia and it is licensed under the GNU Free Documentation License.