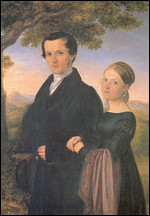 Philipp Friedrich Silcher (27 June 1789 in Schnait (today part of Weinstadt) – 26 August 1860 in Tübingen), was a German composer, mainly known for his lieder (songs), and an important folksong collector.[1]

Silcher was meant to be a school teacher, but dedicated himself entirely to music in the seminary in Ludwigsburg after he met Carl Maria von Weber. He was taught composition and piano by Conradin Kreutzer and Johann Nepomuk Hummel. In 1817 he was named musical director at the University of Tübingen. He is regarded as one of the most important protagonists of choir singing. He arranged many German and international folk songs that even today remain standard repertoire of many choirs in Germany and became an integral part of German daily life. In 1829 Silcher founded the "Akademische Liedertafel" in Tübingen and directed it until his death.

A wine varietal was named after him, the Silcher (not to be confused with Schilcher). The asteroid 10055 Silcher also bears the composer's name.

Amongst his best-known songs are:

This article uses material from the article Friedrich Silcher from the free encyclopedia Wikipedia and it is licensed under the GNU Free Documentation License.

Soul Sister Warren Wolf
Update Required To play the media you will need to either update your browser to a recent version or update your Flash plugin.