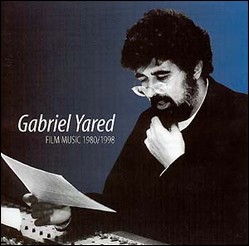 Gabriel Yared (born 7 October 1949) is a French-Lebanese composer, best known for his work in French and American cinema.

Born in Beirut, Lebanon, his work in France included the scores for Betty Blue and Camille Claudel. He later began working on English language films, particularly those directed by Anthony Minghella. He won an Oscar and a Grammy Award for his work on The English Patient (1996) and was also nominated for The Talented Mr. Ripley (1999) and Cold Mountain (2003).

At the age of 7, his father sent Yared to an accordion teacher. Two years later he stopped his accordion lessons and started music theory and piano lessons. His piano teacher thought that he had no future in music.

Although he was not a natural pianist, he was interested in reading music.

At the age of 14, his piano teacher died, so he was to replace him as the organist of Université Saint-Joseph. He used the university's library to read all the work of Johann Sebastian Bach, Robert Schumann, and many others. This extensive reading inspired his first original composition, a piano waltz.

Yared gained a degree in law. His formal musical education only began when he travelled to France in 1969, and attended the École Normale de Musique de Paris as a non-registered student. There he learned the rules of music composition from Henri Dutilleux.

At the end of 1971, he went to Brazil to visit his uncle. There, the president of the World Federation of Light Music Festivals asked him to write a song to represent the Lebanese in the Rio de Janeiro Song Festival. His song won the first prize. While in Brazil, he kept on performing with his small orchestra. Yared maintains that to this day that his time in Brazil greatly influenced his work.

In 1975, he arranged the album Minacantalucio for the popular Italian singer Mina.

He then went back to France, where he met with the Costa Brothers and collaborated with them. There, he wrote many orchestrations, and ended up with three thousand orchestrations in six years. He also collaborated with Jacques Dutronc, Françoise Hardy, Charles Aznavour, and Mireille Mathieu. He had collaborations with many musicians, and contributed to many radio and TV jingles, such as TF1 news jingles which he has created since 1980. He had an episode on the series In the Tracks of.

Yared is best known for his collaborations with the late Anthony Minghella. His first collaboration with Minghella was the 1996 film The English Patient, which was highly acclaimed and won him an Oscar for Best Original Score. He composed the scores for all of Mingella's films that followed, as well as the music for the television series The No. 1 Ladies' Detective Agency, created by Minghella and Richard Curtis.

It was confirmed by author Cassandra Clare in August 2012 that Yared would be composing the score for The Mortal Instruments: City of Bones. However, his score ultimately was rejected and Yared was replaced with Atli Örvarsson.[1]

In 2004, Yared's score to the movie Troy (which he had spent nearly a year working on) was rejected (less than a month before the film's opening) due to the poor reception by an audience at a test screening. The test audience were said to have found Yared's music too "brassy and bold". James Horner, the composer of the scores for such films as Braveheart and Titanic was then hired to create a replacement score in less than four weeks.

Yared expressed his dismay at the score's rejection in an open letter which was posted on his website. He said that the score which the test audience had heard was not yet finished or mixed properly, and that the studio had given him no opportunity to alter his score in light of the audience reaction.

The Director's Cut DVD had one cue re-inserted for a funeral scene (a experimental female vocal piece, featured twice in his score).

Warner Bros. studio still currently owns the rights to Yared's Troy score and an official recording is not currently available and may never be (although selections from the score were briefly posted on Yared's website and private promotional CD).

Film score critic Christian Clemmensen of Filmtracks.com felt that Yared's work for Troy was far superior to what Horner had written, giving Horner's score a 3 star rating and Yared's a 5 star rating, saying that it was "outstanding," and called it the "pinnacle of Yared's career." [2]

Yared created the score to the narrative ballet Raven Girl choreographed to the Royal Ballet by Wayne McGregor after the story by Audrey Niffenegger.[3]

Yared has been nominated for the Academy Award for Best Original Score on three occasions. He won for The English Patient in 1996. He was also nominated for The Talented Mr. Ripley (1999) and Cold Mountain (2003), but lost to John Corigliano and Howard Shore, respectively. He has also received three Golden Globe and three BAFTA nominations for the same films, and won both awards for The English Patient.

He has been nominated for two Grammy Awards, again winning for The English Patient.

This article uses material from the article Gabriel Yared from the free encyclopedia Wikipedia and it is licensed under the GNU Free Documentation License.

Watermelon Man TwoBones feat. Dado Moroni
Update Required To play the media you will need to either update your browser to a recent version or update your Flash plugin.