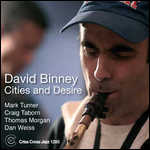 Binney was born in Miami, Florida and was raised in Carpenteria, California. From his parents, who loved music, he heard albums by John Coltrane, Miles Davis, Wayne Shorter, and Jimi Hendrix. He took saxophone lessons in Los Angeles. When he was nineteen, he moved to New York City and studied with saxophonists George Coleman, Dave Liebman, and Phil Woods. A grant from the National Endowment for the Arts helped him record his first album, Point Game (Owl, 1991). In the 1990s, he started his own label, Mythology Records.[2]

This article uses material from the article David Binney from the free encyclopedia Wikipedia and it is licensed under the GNU Free Documentation License.

Satin Doll Marc Hemmeler & Herb Ellis
Update Required To play the media you will need to either update your browser to a recent version or update your Flash plugin.