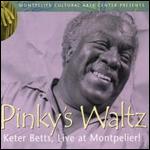 Many better-known musicians (Dinah Washington, Ella Fitzgerald, Oscar Peterson, Nat Adderley, Stan Getz, Charlie Byrd and others), recognizing Keter's talent, invited him to perform with them professionally. Early in Keter's career he had played with Earl Bostic's R&B band. In 1962, together with Stan Getz and Charlie Byrd, he was instrumental in introducing the bossa nova style to American audiences via their Jazz Samba recording.[2] In the mid-1960s, Keter began a nearly quarter-century relationship as a bassist with Ella Fitzgerald.[1]

A widowed father of five children,[2] Betts resided in the Washington, DC, area for more than a half century. He died at his home in Silver Spring, Maryland, in August 2005.[1]

This article uses material from the article Keter Betts from the free encyclopedia Wikipedia and it is licensed under the GNU Free Documentation License.

He Belongs To Me Three Hours Past Midnight & The Atomic Horns
Update Required To play the media you will need to either update your browser to a recent version or update your Flash plugin.