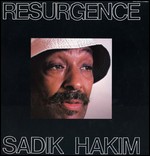 Thornton was taught piano by his grandfather and started playing professionally about 1939. In 1944 he moved to New York City and was hired by Ben Webster. He participated in the emergence of bebop, reputedly sharing piano duties with Dizzy Gillespie on Charlie Parker's "Ko-Ko" session in November 1945 and recording with Dexter Gordon and Lester Young (he can be heard on Young's "I'm Confessin'"). Hakim is credited with co-writing Thelonious Monk's standard "Eronel" and is rumored to have written a few famous bop tunes credited to other composers. He adopted his Muslim name in 1947.

Hakim moved to Montreal after visiting in 1949 and was active on the bebop scene there, working with Louis Metcalf's International Band. However, he was compelled to leave Canada following an incident involving drugs in November 1950. Through the 1950s he worked in New York with James Moody and George Holmes Tate. He returned to Montreal from 1966 to 1976, leading bands and recording with Charlie Biddle. He led a few recording dates from 1976–1980 and cut an album with Sonny Stitt in 1978.

Hakim played "'Round Midnight" at Thelonious Monk's funeral in 1982, and died himself the following year.

This article uses material from the article Sadik Hakim from the free encyclopedia Wikipedia and it is licensed under the GNU Free Documentation License.

St. Louis Blues Oscar Klein & Lino Patruno: European All Stars
Update Required To play the media you will need to either update your browser to a recent version or update your Flash plugin.