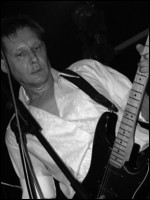 Jo Callis (born John William Callis 2 May 1951, Rotherham) is an English musician who played guitar with the Edinburgh based punk rock band, The Rezillos (under the name Luke Warm), and post-punk band Boots For Dancing before joining The Human League.[1]

Callis was educated at the Edinburgh College of Art.. He was a member of The Knutsford Dominators before forming The Rezillos in 1976.[1] He wrote the Rezillos' 1978 hit "Top of the Pops". In late 1978, after the release of the band's only album, The Rezillos split in two, with Callis forming Shake along with Simon Templar (b. Simon Bloomfield) and Angel Patterson.[1] Shake released two singles before splitting, with Callis later joining Boots for Dancing. Callis released a solo single, "Woah Yeah!", in 1981 on the pop:Aural label,[2] and also joined The Human League, playing both keyboards and lead guitar and making contributions as a backing vocalist.[1] Callis co-wrote many tracks and following his departure from the band in 1986, he has returned several times either to play keyboard, or to offer help with songwriting.

In 1985 he teamed up with Feargal Sharkey to write Sharkey's "Loving You" which reached number 25 in the UK Singles Chart.

This article uses material from the article Jo Callis from the free encyclopedia Wikipedia and it is licensed under the GNU Free Documentation License.

Ask Me Now Irène Schweizer
Update Required To play the media you will need to either update your browser to a recent version or update your Flash plugin.