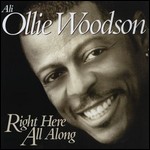 Ali-Ollie Woodson (September 12, 1951 – May 30, 2010) was an American R&B singer, songwriter, keyboardist and occasional actor who was best known for singing with The Temptations from 1984 to 1996. Additionally, he also worked with Aretha Franklin and Bill Pinkney.

Woodson was born Ollie Creggett[1] on September 12, 1951 in Detroit, Michigan, but was raised in Town Creek, Alabama.

Bill Pinkney started Woodson on the road at the age of 19, giving him a job as a musician and then vocalist for Bill Pinkney's Original Drifters in the early 1970s. He would return to lead The Original Drifters' gospel song "True Love" in 1996 on the CD Peace in the Valley (Malaco). Woodson always referred to Pinkney as his Father in the music business and Woodson sang Walk Around Heaven All Day at Pinkney's Homegoing service in July, 2007.

Tenure with The Temptations

He is notable for being lead singer of Motown act The Temptations from 1984 to 1986, and from 1988 to 1996. He had first recorded with The Temptations in 1983 on their Back to Basics album, when he was invited to perform lead vocals on the album track, "Stop the World Right Here (I Wanna Get Off),"[2] filling in for an exhausted Dennis Edwards. The following year, Edwards was fired from The Temptations, and Woodson was officially welcomed on board as his replacement. Woodson began his tenure in the group on a high note when he co-wrote, co-produced, and sang lead/played keyboards on the 1984 Temptations single "Treat Her Like a Lady," which appeared on his first full album with the group, Truly for You, and was a #2 hit on the U.S. R&B charts.

He continued to compose and sing lead on other moderate hits with The Temptations throughout the mid-1980s, up until his first departure from the group in 1987. However, he would rejoin the group the following year, and remained with them up through their 1995 album, For Lovers Only.

Woodson, who wasn't a member of The Temptations after 1996, toured with the band in Japan in 2002 when member Barrington "Bo" Henderson was unable to accompany the group due to visa problems.

Since leaving the group, Woodson began a solo career, and often toured with a Temptations-like revue called Ali-Ollie Woodson & the Emperors of Soul (Emperors of Soul being the name of the Temptations' 1994 box set). In 1997, he guest starred on an episode of The Jamie Foxx Show as a patient in a mental hospital. He also appeared in a handful of movies after that. He also appeared in the choir of the TV show The Good News which aired in 1997-1998.

From 2006 to 2008, he was in The Temptations Revue featuring Dennis Edwards, although he and Edwards were never Temptations members at the same time. Upon leaving this group, Woodson was replaced by the relative of another legend from The Temptations: Paul Williams' son Paul Williams Jr., who is still currently performing with Edwards. Woodson also toured with Aretha Franklin in 2008.

According to his testimony at a televised religious service, Woodson was first diagnosed with throat cancer during one of his tenures with The Temptations. Despite having the cancer removed, Woodson would again need to undergo surgery when the cancer returned two years later and another two years following that surgery.[3]

In late 2008, Woodson was diagnosed with leukemia and hospitalized for several weeks.[4] Woodson died in southern California on May 30, 2010 after battling leukemia for nearly eighteen months.[5]

Woodson is survived by his wife, Juanita;[1] his two children with Juanita, Ali Ollie Jr. "Aj" and Aliah Woodson;[3] along with his other children Jhae,[6] Sophie, LaTeasha, Justin, and Keisha.[7]

This article uses material from the article Ali-Ollie Woodson from the free encyclopedia Wikipedia and it is licensed under the GNU Free Documentation License.

Hamp's Hump Sandro Schneebeli Boogaloo 4tet (Quartet)
Update Required To play the media you will need to either update your browser to a recent version or update your Flash plugin.