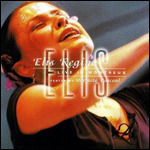 Her untimely death, at the age of 36, shocked Brazil. She has frequently been regarded as the greatest Brazilian singer of all time by critics, musicians, and commentators.[2][3][4][5][6]

Elis Regina was born in Porto Alegre, where she began her career as a singer at age 11 on a children's radio show, O Clube Do Guri on Rádio Farroupilha. In 1959, she was contracted by Rádio Gaúcha and in the next year she travelled to Rio de Janeiro where she recorded her first LP, Viva a Brotolândia (Long Live Teenage Land) and her second LP, "Poema".,[2] employing a number of popular musical styles of the era.

She won her first festival song contest in 1965 singing Arrastão (Pull The Trawling Net)[7] by Edu Lobo and Vinícius de Moraes, which, when released as a single, made her the biggest selling Brazilian recording artist since Carmen Miranda. The second LP with Jair Rodrigues, Dois na Bossa, set a national sales record and became the first Brazilian LP to sell over one million copies. Arrastão by Elis also launched her career for a national audience, since that festival was broadcast via TV and radio. For the history of Brazilian music, the record represented the beginning of a new musical style that would be known as MPB (Música popular brasileira or Brazilian Popular Music), distinguished from the previous bossa nova and other preceding musical styles, although samba is very much at its core. Most of her entire 20 year recorded discography is still available.

In the late 1960s and early 1970s, along with Gal Costa, Caetano Veloso and Gilberto Gil, Elis Regina helped to popularize the work of the tropicalismo (Tropicália) movement, recording songs by musicians such as Gilberto Gil. Her 1974 collaboration with Antonio Carlos Jobim, Elis & Tom, is often cited as one of the greatest bossa nova albums of all time, which also includes what many consider the all-time best Brazilian song, "Águas de Março". She also recorded songs by Milton Nascimento, João Bosco, Aldir Blanc, Chico Buarque, Guinga, Jorge Ben, Baden Powell, Caetano Veloso and Rita Lee. Her nicknames were "furacão" ("hurricane") and "pimentinha" ("little pepper"), opening a window on both her singing style and personality.

She sometimes criticized the Brazilian dictatorship which had persecuted and exiled many musicians of her generation. In a 1969 interview in Europe, she said that Brazil was being run by "gorillas". Her popularity kept her out of jail, but she was eventually compelled by the authorities to sing the Brazilian national anthem in a stadium show, drawing the ire of many Brazilian Leftists. She was later forgiven because they understood that, as both a mother and daughter, she had to protect her family from the dictatorship at any cost. Along with many other artists Elis was living each verse of Geraldo Vandré's political hymn:[8] Yet they make of a flower their strongest refrain, And believe flowers to defeat guns. While her earlier records were mostly apolitical, from the mid-1970s on her music became more engaged, and she began to choose compositions and structure her conceptually complex live shows in ways as to criticize the military government, capitalism, racial and sexual injustice and other forms of inequality. Lyrics to songs recorded towards the end of her career carried overt socialist leanings, and in 1980, she joined the Workers' Party.

Elis married twice and gave birth to three children. Her first marriage was to Ronaldo Bôscoli in 1967. She gave birth to a son, João Marcelo Bôscoli, in 1970. She later married her long-time collaborator, pianist/composer/arranger César Camargo Mariano, and had two more children with him: Pedro Camargo Mariano in 1975, and Maria Rita in 1977. The three children all later became musicians and/or producers. After many years of complete obscurity, Maria Rita became a national singing sensation after a lengthy marketing campaign, like her mother, winning three Latin Grammies for her debut eponymous CD. João Marcello Boscoli, owner of the Trama recording company, produced the first Elis Regina DVD allowing many of her fans to see her performing for the first time. The DVD was a recording of a 1973 Brazilian TV show featuring songs, Elis' running commentary introducing each song, and an interview. Pedro Camargo Mariano most recently sang with his father, the brilliant pianist and arranger César Camargo Mariano, on a Latin Grammy-nominated CD called Piano & Voz (Piano and Voice). More DVDs of Elis Regina performances have subsequently been released.

Elis Regina died at the age of 36 in 1982, from an accidental cocaine, alcohol, and temazepam interaction.[1] More than 15,000 people, among friends, relatives and fans, held her wake at Teatro Bandeirantes, in São Paulo, with large groups of fans singing her songs. More than 100,000 people followed her funeral procession throughout São Paulo. She was buried in Cemitério do Morumbi.[9]

This article uses material from the article Elis Regina from the free encyclopedia Wikipedia and it is licensed under the GNU Free Documentation License.

I Never Knew Benny Goodman Trio
Update Required To play the media you will need to either update your browser to a recent version or update your Flash plugin.