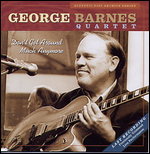 George Barnes (July 17, 1921 – September 5, 1977) was a world-renowned American swing jazz guitarist, who is believed to have played the first electric guitar in 1931, preceding Charlie Christian by six years. George Barnes made the first commercial recording of an electric guitar on March 1, 1938, in sessions with Big Bill Broonzy.

George Barnes was born in South Chicago Heights, Illinois. He started his professional career at the age of 12, when he received his musicians' union card, and toured throughout the Midwest. By the time he was 14, he was accompanying blues vocalists such as Big Bill Broonzy and Blind John Davis. On March 1, 1938, he recorded "Sweetheart Land" and "It's a Lowdown Dirty Shame" with Broonzy, the first commercial recordings of an electric guitar. Later in 1938, he was hired as a staff musician for the NBC orchestra, and became a featured performer on the radio shows National Barn Dance and Plantation Party.

In 1940, Barnes released his first recording under his own name on Okeh Records, "I'm Forever Blowing Bubbles" backed with "I Can't Believe That You're In Love With Me".

Barnes was drafted into the Army in 1942, and served as an intercept operator in the basement of the Pentagon. Immediately after his discharge in 1946, Barnes formed The George Barnes Octet and was given a 15-minute radio program on the ABC network.

He and his wife, Evelyn Lorraine Triplett, married in Chicago on January 17, 1947.

In 1951, Barnes was signed to Decca Records by Milt Gabler and moved from Chicago to New York City. In 1953, he joined the orchestra for the television show, Your Hit Parade. The band was conducted by Raymond Scott and Barnes was a featured soloist. Barnes, Scott, and vocalist Dorothy Collins (Scott's wife) also recorded together.[1]

In addition to being a well-known jazz musician, Barnes also made a living as a New York studio musician, and played on hundreds of albums and jingles from the early 1950s through the late 1960s. Barnes was primarily a swing jazz guitarist, but could play in any style, as evidenced by his work on The Jodimars [2] Barnes participated in hundreds of pop, rock and R&B recording sessions: he was a regular guitar player on most of The Coasters' hit records produced by Jerry Lieber and Mike Stoller, he provided the guitar solo for the Connie Francis hit "Lipstick on Your Collar (song)," and he can be heard on The Drifters' version of "This Magic Moment" and Jackie Wilson's "Lonely Teardrops".

Barnes recorded three albums for Mercury Records: "Movin' Easy," with Barnes' Jazz Renaissance Quintet in 1960, "Guitar Galaxies" in 1960, and "Guitars Galore" in 1961. The latter two recordings contained Barnes' unique orchestrations with 10 guitars, also known as his "guitar choir," which utilized the guitars as a horn section. They were two in a series of Mercury albums that used an early 1960's state-of-the-art recording technique known as "Perfect Presence Sound."

His albums with his guitar duo partner Carl Kress received national acclaim in the early 1960s. Barnes and Kress were invited to play the White House staff Christmas party on December 17, 1964. For the occasion, Barnes wrote a song for First Daughter Luci Baines Johnson, "Watusi for Luci," as she was then famous for attending discothèques and dancing The Watusi with Hollywood celebrities. The recording was used as the theme for The Clay Cole Show in 1965, when the show was renamed Clay Cole's Discotek.

After the 1965 death of Kress, Barnes formed another guitar duo with Bucky Pizzarelli. Their partnership lasted from 1969-1972, and they recorded two albums.

In 1973, Barnes created a partnership with cornetist Ruby Braff. The Ruby Braff/George Barnes Quartet made their debut in Carnegie Hall at the 1973 Newport Jazz Festival. The quartet recorded several albums, including "Live at the New School" for Chiaroscuro Records in 1974 and "To Fred Astaire with Love" for RCA in 1975. They also recorded a double album with Tony Bennett in 1973, "The Rodgers and Hart Songbook."

From 1973 until 1977, Barnes recorded several well-received albums for Concord Jazz under his own name, as well as with the quartet he had formed with Braff. He also recorded two Concord Jazz albums with jazz violinist Joe Venuti.

Barnes and his wife, Evelyn, had left New York City after his last European tour in 1975 to live and work in the San Francisco Bay Area. Barnes died of a heart attack in Concord, California in 1977, at the age of 56.

He recorded two songs, "Sweetheart Land" and "It's a Low-Down Dirty Shame" with Big Bill Broonzy, produced by Lester Melrose in Chicago on March 1, 1938. Some historians incorrectly attribute the first recording to Eddie Durham, but Durham's recording with the Kansas City Five was not until 15 days later, on March 16, 1938. Several recordings of an electric lap steel guitar precede both, including recordings by Milton Brown and his Musical Brownies with Bob Dunn on electric lap steel as early as January 1935. But the 1938 Big Bill Broonzy with George Barnes is actually the very first one to feature an electrically-amplified, non-lap steel guitar.

Barnes' style took shape before the development of bebop, and he remained a swing stylist throughout his career. His lines were usually short, very melodic, bluesy and "inside" (i.e. diatonic) as compared to the chromaticism and long lines of bop era guitarists. His improvisations often employed call and response phrases, and his tone was clearer, cleaner and brighter than many other jazz guitarists (such as Joe Pass or Jim Hall) and reflected his "happy" approach to music.

Not long before his death, he recorded three live albums -- two produced from a concert at San Francisco club Bimbo's 365, the other at The Willows Theatre in Concord, California. The albums are good examples of his swinging, happy and often mischievous style. The albums also include his banter with the audience, and his introductions of tunes and his band, giving the listener a glimpse into his sense of humor.

In a review of the album Don't Get Around Much Anymore (material from a 1977 Concord, California concert that was recorded a little more than a month before Barnes' sudden death at the age of 56), Jim Ferguson wrote: "Often overlooked in a sea of more modern-sounding, bebop-oriented guitarists, George Barnes could swing like mad and spin out intricate, frequently bluesy phrases with awesome precision and musicality.... From start to finish, this well-recorded performance demonstrates the qualities that qualify Barnes for a position among the most elite players in the annals of jazz guitar."[3]

In 1942, Barnes wrote the first electric guitar method, The George Barnes Electric Guitar Method, published by Wm. J. Smith. In 1961, he wrote and recorded for Music Minus One, George Barnes' Living Guitar Method; The Easy Way to Learn All the Chords and Rhythms and Ten Duets for Two Guitars (recorded with his partner Carl Kress). In 1965, he wrote How to Arrange for Solo Guitar, published by Peermusic. He also produced the first guitar course offered on cassette tape, The Great George Barnes Guitar Course, published in 1970 by Prentice Hall.

This article uses material from the article George Barnes (musician) from the free encyclopedia Wikipedia and it is licensed under the GNU Free Documentation License.

No Mosquito Please Renato Anselmi
Update Required To play the media you will need to either update your browser to a recent version or update your Flash plugin.