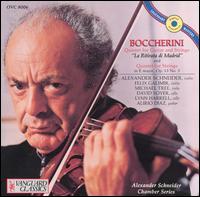 Alexander Schneider (21 October 1908 2 February 1993) was a violinist, conductor, and educator. Born to a Lithuanian Jewish family in Vilnius, Lithuania, he later moved to the United States as a member of the Budapest String Quartet. He died in Manhattan, New York City, at the age of 84.[1]

Alexander (Sasha) was born Abram Sznejder. At 13 he almost died of tetanus after cutting his knee in an accident. The tetanus distorted his joints and recovery was long and painful. Sasha left Vilnius in 1924 and joined his brother Mischa Schneider in Frankfurt, after securing a scholarship to study violin with Adolf Rebner, the principal violin tutor at the Hoch Conservatory.

In 1927, Alexander became leader (concertmaster) of an orchestra in Saarbrücken. It was at this point that he changed his name. The orchestra director wanted him as leader but wanted a German-sounding name. Abram took Schneider as a surname because his brother Mischa had already selected it. Alexander appealed to him as a first name. In 1929 he was appointed leader of the Norddeutscher Rundfunk Orchestra in Hamburg. In 1932, he lost this job as a result of the ongoing Nazi campaign against Jews - soon the time would come to leave Germany.[2]

At this time, the Budapest String Quartet, whose cellist was Sasha's brother Mischa, lost their first violinist. Although the quartet had not yet left Germany, they spent a lot of time out of the country, were self-employed, and the Nazis had not yet caught up with them. For Sasha to join them was an ideal arrangement all round. Their existing second violinist, Josef Roismann, switched to first and Sasha joined as second. This was because Roismann was already comfortable with the other players whereas Sasha would need time to learn their repertoire and style.[2]

In 1934 the Nazis made threats to the quartet and they left Berlin for Paris the next day, never to return to Germany again - even on tour. When war broke out in 1939 they happened to be on tour in the United States. They all obtained permission to stay and from then on made it their base.[2]

Later on, Schneider felt the need to develop himself as an independent musician so he left the quartet in 1944, full of energy and ideas. He was offered a conductorship of the Metropolitan Opera, and leadership of the Pro Arte and Paganini Quartets but turned them down. He toured with Ralph Kirkpatrick and he formed the Albeneri Trio with Benar Heifetz and Erich Itor Kahn.[2]

In 1949 Schneider formed the Schneider Quartet to perform and record all eighty-three of Haydns quartets. This was not completed because its sponsor, the Haydn Society, ran out of funds.[2] The same year he recorded Bach's complete Sonatas and Partitas for Unaccompanied Violin (BWV 1001-1006) for Mercury Records.[3]

He studied with Casals in Prades. There he persuaded Casals to participate in the 1950 Prades Festival to honour the two hundredth anniversary of Bachs death.[2] He supported Casals in further Bach festivals at Prades and Perpignan.[2] Later he would conduct Casals' oratorio The Manger (El Pessebre) in Guadalajara, Jalisco, Mexico, during the Festival Casals de México, recording it in 1973 in Puerto Rico.

Schneider was a very sociable man with a wide circle of friends. He worked hard to promote chamber music with free or subsidized concerts.[2]

In 1956 the Budapest String Quartet persuaded Schneider to rejoin them. They had tried two other second violinists (Ortenberg and Gorodetzky), neither of them able to reach Schneider's high standards, and Roismann had refused to continue with anyone else. Schneider had remained in close contact with the quartet and he stood in for Ortenberg or Gorodetzky when they were ill. Now it was agreed the quartet would operate part-time with Schneider and he would continue his independent career. They finally disbanded in 1967.[2]

Schneider was the Artistic Director of the Schneider Concerts at The New School (New York City), from 1957 until his death.[4] Under the auspices of the New School, Schneider and his manager, Frank Salomon, founded the New York String Orchestra, a year-end seminar-performance for young string musicians, in 1969.[5]

In addition to the Budapest String Quartet, he played with a number of other chamber groups, among them his own string group, and the Brandenburg Ensemble.[6]

He received the Kennedy Center Honors in 1988.

This article uses material from the article Alexander Schneider from the free encyclopedia Wikipedia and it is licensed under the GNU Free Documentation License.

She's nice but... Ruby's Place
Update Required To play the media you will need to either update your browser to a recent version or update your Flash plugin.