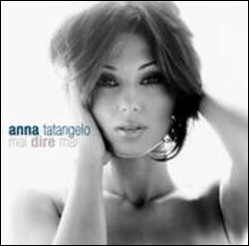 Anna Tatangelo (born 9 January 1987) is an Italian pop singer. At the age of 15, she became the youngest person to win the Newcomer's Award at the prestigious Sanremo Music Festival singing contest. Her repertoire consists mainly of pop music (with slight influences of neo-melodic in some of the songs composed for her by singer Gigi D'Alessio), but also in the fifth fusion albums Progetto B. She faced several social issues and current affairs, such as the empowerment of women, homophobia, anorexia and violence against women. Since 2007 she also wrote some songs. She participated in the Sanremo Music Festival six times in ten years, winning in 2002 with the song "Doppiamente fragile" and getting on the podium three more times: in 2005, when it was ranked third in the category "Women" with "Ragazza di periferia", in 2006, when it was ranked in third place overall and first in the category women with "Essere una donna" and in 2008, when, with the song "Il mio amico" has reached the second position. The last was in 2011 with the song "Bastardo". She has a romantic relationship with singer Gigi D'Alessio.[1] Up to date has sold nearly 1 million copies worldwide.

Anna Tatangelo was born in Sora from a family of producers of traditional bagel sorana; since 1994, age 7, she began to take part in several shows in provincial and regional contests, collecting numerous placements, such as in 1999, where she placed second with "Minifestival della canzone" of Viterbo, which she won a year later. In 2001 she participated in the concert "La nota d'oro di Blera", won the traveling "Bravissimi in tour" stop in Sora and also won the national final of Cassano. Again, she won second place in the final of the competition "Una voce per ... " and another victory to" Castelliri in Musica. " In August of that year, at age 14, she was selected by Rai for "Girofestival" where she presented her first novel, titled Where is the courage, for the same song he shot his first music video and also signs her first record deal (with the CSB Italy - Casalba). She perfected her style at the Music Academy of Sora, where she played for the youth choir in concert. In September of that year she participated and won the Academy's Song of Sanremo with the song Angelo of Syria: with this victory comes right in the cast of the youth category of the Sanremo Music Festival in 2002.

In 2002, Tatangelo became the youngest person at 15 years old to win the Sanremo Music Festival's Newcomer's Award. Pippo Baudo chooses as co-host transmission "Sanremo Top", along with Silvia Mezzanotte, with the winner Matia Bazar. In the same year a duet with Gigi D'Alessio in "Un nuovo bacio", reaching ninth place among the best-selling singles. In July he took part at the XVII World Youth Day, playing Amazing Grace with Tiziano Ferro, Raf, and Antonella Ruggiero. In 2003 Tatangelo at Sanremo Music Festival returns, this time in the Big, paired with Federico Stragà, with the song "Volere volare", signed by Claudioeg Bungaro and Claudio Passavanti. Summer Run preceded by the single comes out in August 2003 his first album, entitled Attimo per attimo produced by Fio Zanotti, the piece that gives the title track is a song originally written by the same Zanotti for Mia Martini, who died before to run it. From the album, as well as Corri, it extracts the same Attimo per attimo and L'amore più grande che c'è. In 2004 she was chosen by Disney to sing with Gigi D'Alessio in Il mondo è mio, the soundtrack of the animated film Aladdin. In the same year, as well as working with several concerts of his first official tour, established a collaboration with the Video Italia channel: she was entrusted with the band for the afternoon Playlist Italy introduce such interviews, and live video programs requested by viewers of Live Italy. Tatangelo collaborates with Video Italia for two years.

In 2005, at eighteen, she participated for the third time at the Sanremo Music Festival with "Ragazza di periferia", a song written by Gigi D'Alessio with Vincenzo D'Agostino and Adriano Pennino. The song will be classified third in the category Women and weeks after the position reaches number 16 in the ranking of best-selling singles in Italy. By participating in the Festival will also quit the singer's second album, also titled "Ragazza di periferia". Two songs on the album (Dimmi dimmi e Quando dua si lasciano) are included in the soundtrack of the movie "Troppo belli". In July, after graduating from high school, Tatangelo starts on Tour in 2005, which includes several dates throughout Italy. When two are left is the new single. On 23 September the same year he participates in an O'scià and Italian pop music festival conceived by Claudio Baglioni and, during the same month, is the third single from the album, Qualcosa di te. In December, the host of the tour to Australia by Gigi D'Alessio. In 2006 Tatangelo his debut on records in Brazil and South America and get flattering criticism from European and French in particular. For the fourth time in five years, participated in the 56th Sanremo Music Festival with "Essere una donna", a song composed by Mogol and Gigi D'Alessio. During the course of the event on the evening of duets, performing a reworked version of the song, accompanied by Alberto Radius and Ricky Portera. The song won in the category Women and this statement allows her to participate in the final vote, where it ranks third. The song reached the fourth position in the FIMI. With the fourth participation in the Festival also comes a reissue of the album Ragazza di periferia, to which is added to the song San Remo and the brand "Colpo di fulmine", becoming one of the catchphrases of the summer 2006. The album was certified platinum with 150.000 copies sold. In summer, toured Italy with the summer tour and is awarded to the first in Venice Music Awards for Female Revelation 2006. In September, participating for the second consecutive year, the Festival O' scià.

Preceded by the single "Averti qui" arrives on 2 November, after a wait of two years, the third album titled "Mai dire mai", which represents the Tatangelo his debut as a writer: his people are the texts of the already mentioned here and Averti qui e Lo so che finirà, the album, which also sees the contribution of Gaetano Curreri of the Stadio, along with author Saverio Grandi Cosa ne sai, reached the sixth position of the FIMI and in November for a week also enters the Billboard European Hot 100, a prestigious list of 100 best-selling albums in Europe, the eightieth position, in addition to this unique Italian album of Eros Ramazzotti e ². Between October and November of that year, Tatangelo was a guest in the American tour of Gigi D'Alessio. The second single from the album, from 23 November, I know it will end, accompanied by a video shot in San Francisco during the American tour under the direction of Gaetano Morbioli. The song, with over 18,000 downloads and reaches a gold record. The year 2008 saw its fifth participation in the Sanremo Festival, where it ranks second with the song My friend, dedicated to a gay friend of the singer, who has been criticized by some negative associations of homosexuals. The song reaches the second position in the ranking of best-selling singles and was certified platinum. Anna,duet with Michael Bolton and the same is inserted in the repackaging of the duet Mai dire mai, published on 29 February, who has since passed 130,000 copies and also reached platinum status. In March, begins his first theater tour throughout Italy, which received huge acclaim, and May 17 on the summer tour dates with more than fifty throughout Italy and one in Switzerland (Zurich), in September. On May 30, extracts the new single "mai dire mai".

On 7 November 2008 the new single "Profumo di mamma", the song anticipates the release of the new disc, which occurred on 28 November, titled In the world of women, a concept album entirely focused on the female. The album after only one month is certified platinum with over 100,000 copies sold. From 30 January enters the second single chosen radio airplay for the album, Rose broken song of protest against the abuse of women. With this single, the artist joins the association "Doppia difesa" of Michelle Hunziker and Giulia Bongiorno, and on 5 February, on the cover of TV Smiles and Songs with the same Hunziker, says it will donate the proceeds arising from the above download the song foundation. In June 2009, contributes to the mega-concert at the San Siro stadium in Milan in favor of victims of the L'Aquila Earthquake of 2009. The charity initiative called Friends for Abruzzo is the brainchild of Laura Pausini and involves other female singers of Italian music.While giving his adherence Anna Tatangelo can not attend the event, however, on 21 June for health reasons. On 27 November 2009 he released QPGA, album Claudio Baglioni in which the song "Due universi" is sing in duet with Tatangelo and Gigi D'Alessio.

X Factor 4,Progetto B and Dancing with the stars (Ballando Con Le Stelle)

In 2010 the singer participates in as a judge, the fourth edition of X Factor: Anna Tatangelo is entrusted with the Women 16/24, driving with the help of Adriano Pennino as a vocal coach. On 10 December 2010, with Valeria Marini and Gigi D'Alessio, publishes the compilation 3 x Te, project whose proceeds are intended to be donated to the associations Noi come voi, Doppia difesa and Amri In 2011 Anna Tatangelo is participating for the sixth time in Sanremo Music Festival with a song of which he is co-author, Bastardo, a rock ballad, with which it to the finals and is ranked ninth. The performances of the song are the most-watched by viewers of the 2011 according to Auditel (with 17.088 million contacts in one evening at onset). In conjunction with participation in the festival the singer is published 16 February 2011, the fifth album titled Project B. The album contains 12 previously unreleased songs and a re-interpretation of "Mamma", the song by Cesare Andrea Bixio chosen by the artist for the evening's special festival for the 150 anniversary of the unification of Italy. Among the authors of the songs on the album appear that Mario Biondi and signature Se e L'aria che respiro, the latter a duet sung by Tatangelo and published on 1 April as the second single, and Renato Zero, who wrote the song dedicated to the artist, Anna. On 22 March the Mondadori publishes the autobiography of Anna Tatangelo "Ragazza di periferia, La mia piccola favola". In May of that year he took part in the Wind Music Awards and the tour begins. Senses comes out on 24 June, the third single from Progetto B, accompanied by a video directed by Cosimo Alemà previewed on the site of ANSA and published by 27 June. In 2012, participating as a competitor, teamed with Stefano Di Filippo, the eighth season of Dancing with the stars, the talent show on Rai Uno dance hosted by Milly Carlucci, with the participation of Paolo Belli, where it ranks in third place and where she obtained the standing ovation by judges and public. Won boogie woogie Award, which goes annually to the couple who ran the ball better. Take part in Dancing with you where he won the team battle in Bobo Vieri team and ranks second in the Champions League. On 15 June 2012 Anna performed at the studios' Interlomas "of Mexico City as a guest in the concert Gigi D'Alessio singing "Un nuovo bacio" and "Lo so che finirà" in Spanish. On September 2012, Anna flew to Egypt for a photoshoot and a TV transmission on travel and she was judge of Miss Italy on 9 and 10 September.

This article uses material from the article Anna Tatangelo from the free encyclopedia Wikipedia and it is licensed under the GNU Free Documentation License.