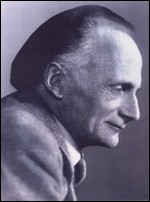 Rutland Boughton (23 January 187825 January 1960) was an English composer who became well known in the early 20th century as a composer of opera and choral music.

His oeuvre includes three symphonies, several concertos, part-songs, songs, chamber music and opera (which he called "music drama" after Wagner). His best known work was the opera The Immortal Hour. His Bethlehem (1915), based on the Coventry Nativity Play and notable for its choral arrangements of traditional Christmas carols, also became very popular with choral societies worldwide.

Through the Boughton Trust (see below), many of his major works have been recorded and are available on disc including The Immortal Hour, Bethlehem, Symphony No 1 Oliver Cromwell, Symphony No 2 Deirdre, Symphony No 3, Oboe Concerto No 1, string quartets and various chamber pieces and songs.

In addition to his compositions, Boughton is remembered for his attempt to create an "English Bayreuth" at Glastonbury, establishing the first series of Glastonbury Festivals. They ran with enormous success from 1914 until 1926. From 1927 until his death in 1960, he lived at Kilcot near Newent, Gloucestershire.

Rutland Boughton was the son of grocer William Boughton (1841-1905) whose shop occupied Buckingham Street in the town of Aylesbury, Buckinghamshire. From an early age he showed signs of exceptional talent for music although formal training opportunities did not immediately become available to him. In 1892 he was apprenticed to a London concert agency and six years later his attention was attracted by several influential musicians including the Rothschild family which enabled him to raise sufficient monies to study at the Royal College of Music in London.

While at RCM, Boughton studied under Charles Villiers Stanford and Walford Davies from 1898 to 1901.[1] He later took up ad-hoc work first in the pit of the Haymarket Theatre then as official accompanist to the baritone David Ffrangcon-Davies (whose daughter, Gwen, later became associated with the Glastonbury Festivals in her famous role Etain in The Immortal Hour). In 1903, he married former Aylesbury neighbour's daughter, Florence Hobley, that he was to regret years later. It was in 1905 (the year he completed his first symphony Oliver Cromwell) that he was approached by Sir Granville Bantock to become a member of staff at the Birmingham and Midland Institute of Music (now the Birmingham Conservatoire).

Birmingham and Midland Institute of Music

It was whilst at Birmingham (1905 to 1911) Boughton was presented with many new opportunities and made many friends. He proved an excellent teacher and an outstanding choral conductor which won him much recognition. He was drawn into socialist ideas through the writings of John Ruskin, William Morris, Edward Carpenter and George Bernard Shaw, the last with whom he developed a lifelong relationship. It was also during those years that he became attached to the young art student, Christina Walshe, who was later to become his partner and artistic "right-hand man" for his Glastonbury projects. His friendship with Shaw had begun when Boughton had been turned down from his invitation to collaborate on an opera. Shaw initially refused to be associated with any of Boughton's music but Boughton would not be dissuaded and eventually Shaw realised they had something in common that was to endure.

Out of his process of self-discovery and self-education, came the artistic aims that were to occupy Boughton for all his life. As a young man, he planned a fourteen-day cycle of dramas on the life of Christ in which the story would be enacted on a small stage in the middle of an orchestra while soloists and the chorus would comment on the action. Although this did not come to anything, the idea remained with him and by 1907 Boughton's discovery of the theories and practises of Richard Wagner, combined with his impression that the church's vision of Christianity had somewhat failed, he turned to another subject - King Arthur. Based upon the Ring Cycle at Bayreuth, and parallel to the ideas of the young poet Reginald Buckley in his book "Arthur of Britain", Boughton set out to create a new form of opera which he later called "choral drama". At this point, the three collaborators - Boughton, Buckley and Walshe - sought to establish a national festival of drama. Whilst London's Covent Garden was ideal for the established operatic repertoire, it would not prove to be so for the plans that Boughton and Buckley had and eventually they decided that they should build their own theatre and, using local talent set up a form of commune or cooperative. At first Letchworth Garden City in Hertfordshire was deemed a suitable location for the project (the Arts and Crafts Movement was significant at that time) but they later turned to the Somerset town of Glastonbury, the alleged resting place of King Arthur and in an area steeped in legend. Meanwhile, Sir Dan Godfrey and his Bournemouth orchestra had established a reputation for supporting new English music and it was here where Boughton's first opera from the Arthurian cycle, The Birth of Arthur, received its first performance. It was also at Bournemouth where Boughton's 2nd Symphony had a first hearing and The Queen of Cornwall performed for the first time using an orchestra, and attended by Thomas Hardy on whose poem the opera was based.

By 1911, Boughton had resigned from Birmingham and moved to Glastonbury where, together with Walshe and Buckley, he began to focus on establishing the country's first national annual summer school of music. The first production was not the projected Arthurian Cycle but that of Boughton's new choral-drama, The Immortal Hour, composed in 1912, which with a national appeal to raise funds was produced with the full backing of Sir Granville Bantock, Thomas Beecham, John Galsworthy, Eugene Goossens, Gustav Holst, Dame Ethel Smyth and Shaw and others. Sir Edward Elgar promised to lay the foundation stone and Beecham to lend his London orchestra. However, in August 1914, the month set for the opening of the first production, World War 1 had been declared and the full plans had to be postponed. Boughton, however, was determined to proceed and the Festival began and in place of Beecham's orchestra, he used a grand piano and instead of a theatre, the local Assembly Rooms[2] that were to remain the centre of activities until the end of the Festivals in 1926, by which time Boughton had mounted over 350 staged works, 100 chamber concerts, a number of exhibitions and a series of lectures and recitals - something never previously witnessed in England. In 1922, Boughton's Festival Players went on tour and became established at Bristol in the Folk Festival House (now demolished) and at Bournemouth.

The most notable and most successful of Boughton's works is the opera The Immortal Hour, an adaptation of the play by Fiona Macleod (the pseudonym of William Sharp) based on Celtic mythology. Having been successful in Glastonbury and well received in Birmingham, the director of the then new Birmingham Repertory Theatre, Barry Jackson, decided to take the Glastonbury Festival Players' production to London where it achieved the record breaking run of over 600 performances. On its arrival at the Regent Theatre in 1922, it secured an initial run of over 200 consecutive performances and a further 160 in 1923, with a highly successful revival in 1932. People came to see the opera on more than one occasion (including members of the Royal family) and especially to see and hear the young Gwen Ffrangcon-Davies whose portrayal as Etain began her professional acting career.

In addition to The Immortal Hour and Bethlehem, his other operas The Queen of Cornwall (1924) based on Thomas Hardy's play, and Alkestis (1922) based on the Greek play by Euripides (which reached Covent Garden in 1924), were also very well received. These latter works have not been publicly heard since the mid-1960s when the original Boughton Trust, organised by Adolph Borsdorf, sponsored professional concert performances in London and Street in Somerset.

The downfall of the Glastonbury Festivals was hastened when Boughton, sympathising with the miners' lockout and general strike of 1926, insisted on staging his very popular Nativity opera Bethlehem (1915) at Church House, Westminster, London, with Jesus born in a miner's cottage and Herod as a top-hatted capitalist, flanked by soldiers and police.[3] The event caused much embarrassment to the people of Glastonbury who withdrew their support from Boughton, causing the Festival Players to go into liquidation.

From 1927 until his death in 1960, Boughton lived at Kilcot, near Newent in Gloucestershire where he completed the last two operas of his Arthurian cycle (Avalon and Galahad, which to this day have not been performed) and produced some of his finest works, the quality of which has only been realised within the past twenty years. These include his 2nd and 3rd symphonies (the latter was first performed at the London Kingsway Theatre in 1939 in the presence of, among others, Ralph Vaughan Williams, Clarence Raybould and Alan Bush), a number of pieces for oboe (including two concertos, one dedicated to his talented daughter Joy Boughton and the other to Léon Goossens), chamber music and a number of orchestral pieces. In 1934 and 1935, Boughton attempted to repeat his earlier successes at Glastonbury with festivals commissioned at Stroud and Bath, and these saw the release of new works, The Lily Maid (the third opera in the Arthurian Cycle) and The Ever Young. Boughton's reputation was, however, affected by his political leanings towards Communism, and his music was subsequently neglected for the next forty years. Boughton died at the home of his daughter, Joy, in Barnes, London, in 1960.

To restore the composer's reputation, The Rutland Boughton Music Trust[4] was established in 1978, the year of the composer's Centenary, to encourage performances and sponsor recordings of his works. Many of these, including some world premieres, now appear on disc with the Hyperion Records label. The Oliver Cromwell symphony - first heard in 2005 - and three of the Songs of the English (last heard around 1904/5) have been released by Dutton,[5] as well as a selection of Songs for mezzo and pianoforte on the British Music Society's own label. Dutton has also released the world premiere recording of Boughton's adaptation of Thomas Hardy's play, The Queen of Cornwall, sponsored by the Trust.

(NOTE: Details of all compositions can be obtained from The Rutland Boughton Music Trust - see below)

Most of Boughton's original manuscript scores can be viewed at the British Library, Euston Road, London.

Enquiries about the availability of scores for performance should be made to The Rutland Boughton Music Trust or in some cases via the appropriate publisher.

This article uses material from the article Rutland Boughton from the free encyclopedia Wikipedia and it is licensed under the GNU Free Documentation License.