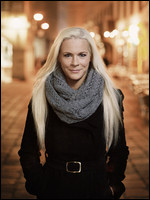 Sara Magdalena "Malena" Ernman (born November 4, 1970, Uppsala, Sweden) is a Swedish opera singer (coloratura mezzo-soprano). Ernman is a versatile artist in her field, who outside the world of opera and operettas also has performed chansons, cabaret, jazz, appeared in musicals and she is a performer who's declared that she's very much attracted to the attributes of varité theatre and small, intimate stage rooms. Ernman represented Sweden at the Eurovision Song Contest 2009 in Moscow, Russia. Malena Ernman is a member of The Royal Swedish Academy of Music.

Ernman spent her childhood and school years in Sandviken, a small town known in Sweden for producing many musical artists, mainly in jazz. Ernman was educated at the Royal Academy of Music in Stockholm, the Music Conservatory in Orléans, France and at the school of the Royal Swedish Opera. Ernman is married to actor Svante Thunberg. They have two daughters, Greta and Beata.

She has worked with René Jacobs in Berlin, Brussels, Innsbruck, Vienna and Paris in roles like Nerone in Agrippina, Roberto in Scarlattis Griselda, Diana in Cavallis La Calisto and Nerone in L'incoronazione di Poppea by Monteverdi. She sang Sesto in Handels Giulio Cesare at the Drottningholm Festival in 2001 and appeared at the Glyndebourne Festival singing Nancy in Albert Herring (summer 2002) and Orlovsky in Johann Strauß Die Fledermaus (summer 2003).

During the 2003/2004 season Ernman sang Donna Elvira in Don Giovanni at La Monnaie in Brussels and Lichas in Hercules with Les Arts Florissants and William Christie at the Aix-en-Provence Festival (also revived at Opéra National de Paris and at Wiener Festwochen). During the spring and summer of 2005, she created the title role in Boesmans Julie at la Monnaie, Wiener Festwochen and in Aix-en-Provence. The spring of 2006 included the title role of Dido and Aeneas (William Christie) in Vienna and Nerone in Agrippina at Oper Frankfurt. In 2006 she made her debut at the Salzburg Festival as Annio in La clemenza di Tito under the baton of Nikolaus Harnoncourt. In 2007 her engagements included Sesto in Giulio Cesare with René Jacobs in Vienna, Cherubino in Le nozze di Figaro with Daniel Harding in Aix-en-Provence and Nerone in L'incoronazione di Poppea in Amsterdam. In 2008 she sang Angelina in La Cenerentola (Royal Swedish Opera) and Dido and Aeneas (William Christie/Opéra-Comique, Paris). Her 2009 engagements include Angelina in La Cenerentola (Oper Frankfurt and Swedish Royal Opera) and Dido in Dido and Aeneas (Christie/D Warner) in Vienna and Amsterdam.

During the 2001/2002 season she could be heard in recital in Tokyo, Bachs St. John Passion in Notre Dame de Paris (Ensemble Orchestral de Paris/John Nelson) and Mozarts Requiem (Berlin Philharmonic Orchestra/Barenbiom). In the 2004/2005 season she made her Wigmore Hall debut and appeared singing Sea Pictures in Trondheim and Berios Folksongs with the Swedish Radio Symphony Orchestra. At the 1999 Nobel Prize Award Ceremony Ernman performed as a soloist.

On November 28, 2008 it was announced that Ernman would enter Melodifestivalen 2009 for the Eurovision Song Contest 2009, with the song "La voix" written by Fredrik Kempe. On February 28, 2009 Ernman competed in the 4th semi-final of Melodifestivalen in Malmö and was announced as a finalist.[1] She then went on to win the final on March 14 at the Globe Arena in Stockholm and to represent Sweden in the final of the Eurovision Song Contest 2009 in Moscow. Sweden was put into the first of two semifinals from which the songs would advance to the finals. At the end of SF1, Ernman emerged as a finalist.[2][3] "La voix" was the first Swedish entry to contain a substantial amount of French lyrics, written by Ernman herself who speaks French fluently.[3] Ernman revealed that the dress for her Eurovision performance cost 400,000 kronor (37,471) and was made by designer Camilla Thulin.[4] Singer Dea Norberg joined Ernman as one of the choirgirls. She qualified through the first semi final on May 12 to the final on May 16 where she finished 21st with 33 points.

This article uses material from the article Malena Ernman from the free encyclopedia Wikipedia and it is licensed under the GNU Free Documentation License.

Let It Rain Deb Ryder
Update Required To play the media you will need to either update your browser to a recent version or update your Flash plugin.