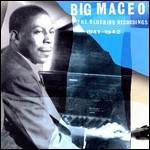 Born in Newnan, Georgia,[1] he was a self-taught pianist. In the 1920s, he moved to Detroit, Michigan, to begin his music career. He moved to Chicago in 1941, where he made the acquaintance of Tampa Red.[3] Red introduced him to Lester Melrose of RCA Victor and its subsidiary label Bluebird Records, who signed Merriweather to a recording contract.[4]

His first record was "Worried Life Blues" (1941), which became a blues hit and remained his signature piece. Other classic piano blues recordings followed, such as "Chicago Breakdown", "Texas Stomp", and "Detroit Jump".[4] His piano style was developed from players like Leroy Carr and Roosevelt Sykes and from the boogie-woogie style of Meade Lux Lewis and Albert Ammons. He in turn influenced other musicians, such as Henry Gray, who credited Merriweather with helping him launch his career as a blues pianist.

His style influenced practically every postwar blues pianist of note.[3] His most famous song, "Worried Life Blues", is a staple of the blues repertoire, with artists such as Eric Clapton performing it regularly in concert.[5] It was in the first batch of songs inducted into the Blues Hall of Fame in the category Classic Blues Recordings – Singles or Album Tracks, alongside "Stormy Monday", 'Sweet Home Chicago", "Dust My Broom", and "Hellhound on My Trail".[6]

Merriweather suffered a stroke in 1946.[3] He died of a heart attack on February 23, 1953, in Chicago and was interred at the Detroit Memorial Cemetery, in Warren, Michigan.[7]

His recordings for RCA Victor/Bluebird were released as a double album, Chicago Breakdown, in 1975. They have since been reissued on various labels.[7]

In 2002, he was posthumously inducted into the Blues Hall of Fame.

On May 3, 2008, the White Lake Blues Festival took place at the Howmet Playhouse Theater, in Whitehall, Michigan. The event was organized by executive producer Steve Salter, of the nonprofit organization Killer Blues, to raise monies to honor Merriweather's unmarked grave with a headstone. The concert was a success, and a headstone was placed in June 2008.

This article uses material from the article Big Maceo Merriweather from the free encyclopedia Wikipedia and it is licensed under the GNU Free Documentation License.

Route 66 Othella Dallas Quartet
Update Required To play the media you will need to either update your browser to a recent version or update your Flash plugin.