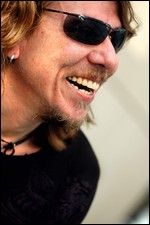 Lenine's career began at the age of 18, when he moved to Rio de Janeiro to compete in a music festival. In 1983, he released his first LP, Baque Solto, with partner Lula Queiroga. Ten years later, he released his second album, Olho de Peixe, with percussionist Marcos Suzano. Lenine's first solo record, O Dia em que Faremos Contato, was released in 1997, featuring a mixture of electronica, northeastern Brazilian rhythms and samba. Two years later, he released Na Pressão. In 2001, Falange Canibal was released. This album attracted international attention due to the appearance of the U.S. group Living Color performing with him on the song "O Homem dos Olhos de Raios-X". His next album In Cité (2004) was recorded live at the auditorium of the Cité de la Musique (City of Music) in Paris.

In addition to being a performer of note, Lenine is an accomplished composer for other artists; he possesses a catalog of over 500 songs written for artists including Maria Bethânia, Milton Nascimento, Daniela Mercury, and Zélia Duncan. Among Lenine's most famous songs is "Relampiando" (lightning strikes), about a child from the favela who sells candies at stoplights. This song, written with Paulinho Moska, was inspired by an encounter between them and a young street vendor in Rio de Janeiro.

This article uses material from the article Lenine (musician) from the free encyclopedia Wikipedia and it is licensed under the GNU Free Documentation License.

Relativity True Blue feat.Pascal Dussex
Update Required To play the media you will need to either update your browser to a recent version or update your Flash plugin.