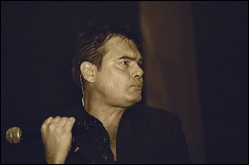 Hartwig Schierbaum (born 26 May 1954), better known by his stage name Marian Gold, is the lead singer of the German synthpop group Alphaville, and has also recorded as a solo artist.[1][2]

Born in Herford, West Germany, Gold became part of the Berlin art collective the Nelson Community, where he formed the band Chinchilla Green in the late 1970s, which also included future Alphaville colleague Bernhard Lloyd.[3] In 1982, he joined Lloyd and Frank Mertens in the band Forever Young, which soon became Alphaville.[3] He sang lead vocals on Alphaville's 1980s pop singles, including "Forever Young", "Big in Japan", "Sounds Like a Melody", and "Dance with Me".

Since the early 1990s, Gold has taken Alphaville from a studio-based project to a successful live act and has established the band's website, Moonbase. [4]

Gold's first solo album, So Long Celeste, was released in 1992.[5] Included on the album were cover versions of "The Shape of Things to Come" (originally by The Headboys) and "One Step Behind You" (by Furniture).

In the late 1980s Gold lived in Münster with his then wife Amy Magill .[6]

This article uses material from the article Marian Gold from the free encyclopedia Wikipedia and it is licensed under the GNU Free Documentation License.

Mistral Gabriele Pezzoli Trio
Update Required To play the media you will need to either update your browser to a recent version or update your Flash plugin.