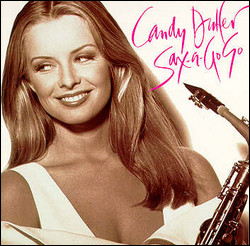 Candy Dulfer (born 19 September 1969) is a Dutch pop, funk alto saxophonist and occasional singer who began playing at the age of six. She founded her band, Funky Stuff, when she was fourteen years old. Her debut album Saxuality (1990) received a Grammy nomination. Dulfer has released eleven studio albums, two live albums, and one compilation album. She has performed and recorded songs with musicians including her father Hans Dulfer, Prince, Dave Stewart, Van Morrison, Angie Stone, and Maceo Parker, and has performed live with Alan Parsons (1995), Pink Floyd (1990), and Tower of Power (2014). She hosted the Dutch television series Candy meets... (2007), in which she interviews fellow musicians. In 2013 she became a judge in the fifth season of the Dutch version of X Factor.

The daughter of saxophonist Hans Dulfer, Candy Dulfer was born on September 19, 1969 in Amsterdam, Netherlands.[1] She began playing the drums at the age of five.[2] As a six-year-old, she started to play the soprano saxophone. At age seven, she switched to alto saxophone and later began playing in a local concert band Jeugd Doet Leven (English translation: "Youth Brings Life") in Zuiderwoude.[2]

Dulfer played her first solo on stage with her father's band De Perikels ("The Perils").[1] At age eleven, she made her first recordings for the album I Didn't Ask (1981) of De Perikels.[2] In 1982, when she was twelve years old, she played as a member of Rosa King's Ladies Horn section at the North Sea Jazz Festival. According to Dulfer, King encouraged her to become a band leader. In 1984, at age fourteen, she started the band Funky Stuff.[1]

Dulfer's band performed throughout the Netherlands and in 1987 was the opening act for two of Madonna's European concerts.[1][2]

In 1988 Prince invited Dulfer on stage to play an improvised solo during one of his European shows.[1] In 1989 Dulfer appeared in Prince's "Partyman" video.[2]

Dulfer performed session work with Eurythmics guitarist and producer Dave Stewart and was a guest musician for Pink Floyd during the band's performance at Knebworth in 1990,[3][4] from which several tracks were released on a multi-artist live album and video, Live at Knebworth '90.[5]

Dulfer's debut album, Saxuality, was released in 1990 and was nominated for a Grammy and certified gold for worldwide sales in excess of half a million. Dulfer has also had smooth jazz chart hits such as "For The Love of You" and "Finsbury Park, Cafe 67".

Dulfer was also the featured saxophonist on Van Morrison's A Night in San Francisco, an album in 1993,[6] and performed with Alan Parsons and his band at the World Liberty Concert in 1995.

Dulfer collaborated with her father Hans Dulfer on the duet album Dulfer Dulfer in 2001.[6] She joined Prince's band in 2004 for his Musicology Live 2004ever tour.[7]

In 2007, she released her ninth studio album Candy Store. The album reached a No. 2 position in Billboard's Top Contemporary Jazz charts.[8] Her songs "Candy Store" and "L.A. Citylights" reached the No. 1 position in Smooth Jazz National Airplay charts in the United States.[9]

Dulfer is mostly a self-taught musician except for some training in a concert band and a few months of music lessons.[1]

In 2007, Dulfer was the presenter and interviewer in Candy meets..., her own television program for public broadcaster NPS. In the series she met with Sheila E., Maceo Parker, Hans Dulfer, Van Morrison, Dave Stewart, and Mavis Staples.[10]

This article uses material from the article Candy Dulfer from the free encyclopedia Wikipedia and it is licensed under the GNU Free Documentation License.

Travels Grégoire Maret
Update Required To play the media you will need to either update your browser to a recent version or update your Flash plugin.