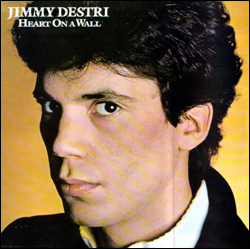 Jimmy Destri (born James Mollica, April 13, 1954, Brooklyn, New York City, United States) is an American musician. He played keyboards in the rock band Blondie, and was one of the principal songwriters for the band along with Chris Stein and Deborah Harry. Destri ceased touring with the band in 2004, but remained an official member for several more years.

Destri became interested in music in the late 1950s and early 1960s due to his uncle being a drummer with Joey Dee and the Starlighters. He formed his first band, the 86 Proof, in high school and they performed in local schools.[2] He played in a group named Milk and Cookies in the early 1970s, but was dismissed from the band just before they relocated to the UK. He joined Blondie in 1975, using the Farfisa organ as his main instrument.[3]

As Blondie's career progressed, Destri became increasingly interested in synthesizers, and added them along with his Farfisa to the overall band's sound. His sister, Donna Destri, sang backing vocals on the 1979 Blondie song "Living in the Real World".

Destri produced Going Up[4] by Joey Wilson for Modern Records, which was released in October 1980. As Blondie members took a break from both recording and touring as a group, Destri released a solo album, Heart on a Wall, in 1981.

After Blondie's break-up in 1982, Destri ran a company that bought, renovated, and sold old buildings. He also produced and remixed material for artists such as Prince and INXS.[5] Blondie reunited in 1997, and released two further albums (1999's No Exit and 2003's The Curse of Blondie) with Destri as keyboard player. By 2004, Destri retired from touring with the band though he intended to keep working with them in the studio. However, he played no part in the writing or recording of their next album (2011's Panic of Girls), effectively ending his tenure in the band.

This article uses material from the article Jimmy Destri from the free encyclopedia Wikipedia and it is licensed under the GNU Free Documentation License.

My Melancholy Baby Coleman Hawkins
Update Required To play the media you will need to either update your browser to a recent version or update your Flash plugin.