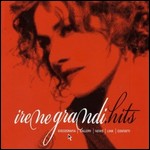 Irene Grandi (born 6 December 1969) is an Italian singer and songwriter.

During her career she has sung in Spanish and has performed duets in German, French, Indian and in African languages, selling around 5 million records and earning 9 top-ten albums and 6 top-ten singles of which one number-one on the Italian music charts.[1][2] She has participated five times at the Sanremo Music Festival gaining the podium in 2000. Grandi has performed for six times at the Festivalbar, conquering twice the platform and winning the Radio Awards. In the 2009 she has won a Wind Music Award, and in 2011 a Sanremo Hit Award.

Irene Grandi was born in Florence.

She debuted in the Sanremo Music Festival in the category New Proposed with "Fuori", in 1994, which was later won by Andrea Bocelli, who was also debuting the same year.[3]

Her first album, Irene Grandi, contained songs written with Eros Ramazzotti ("Sposati subito") and Jovanotti ("T.V.B.").[4] In 1995, her second album, In vacanza da una vita, was released. It contained such songs as "In vacanza da una vita" and "Bum bum". These albums were followed up by Per fortuna purtroppo, Verde rosso e blu, Kose da Grandi, and Indelebile among others.

In 2000, she placed second in the Sanremo Music Festival with a song written together with Vasco Rossi.[5]

In 2004, she made her debut as television presenter with Marco Maccarini at the Festivalbar.[7]

She participated as a contestant in the 60th edition of the Sanremo Music Festival in 2010 with her song "La cometa di Halley" and again in 2015 with "Un vento senza nome".

She participated at the Sanremo Music Festival 2020 with the song "Finalmente io".[8]

This article uses material from the article Irene Grandi from the free encyclopedia Wikipedia and it is licensed under the GNU Free Documentation License.

Miss Otis Regrets Organ-X Plus
Update Required To play the media you will need to either update your browser to a recent version or update your Flash plugin.