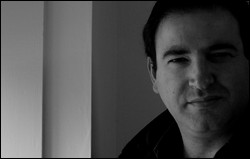 He has works in the repertoire of such high profile musicians as Evelyn Glennie, Michael Houstoun, Michael Brecker, Joshua Redman and the New Juilliard Ensemble, and is one of New Zealand's most frequently performed composers. He has established an international profile and receives regular commissions from organisations in New Zealand and overseas.

Psathas grew up in Taumarunui and then Napier. He attended Napier Boys' High school and left early to study composition and piano at Victoria University of Wellington. He supported himself as a student partly by playing up to nine gigs a week in a jazz trio.

Psathas studied further with composer Jacqueline Fontyn in Belgium before returning to New Zealand, where he has since lectured in music at Victoria University and continued to fulfil a busy schedule of commissions.

Early success came with Matre's Dance in 1991, a maximum-energy duet for percussion and piano that has since made Psathas' name internationally through having been taken up and championed by percussionist Evelyn Glennie. This work and Drum Dances are fast becoming standard repertoire for percussionists throughout the world.

According to his publisher Promethean Editions, a new work by John Psathas is an individual, unique entity, and his music is like that of no-one else. His 'sound' is difficult to define – the harmony and improvisational feel of jazz, the compelling rhythmic drive and excitement of rock music and the sustained repetitive textures of minimalism are apparent as influences, yet they combine and intermingle with something else more intangible. This undefinable quality is partly what makes his one of the most original voices in the arena of contemporary classical music in New Zealand.

Psathas' relationship with Evelyn Glennie has been a particularly fruitful one for them both. Her performing repertoire includes Matre's Dance, Drum Dances, Spike, Happy Tachyons and the double concerto for piano and percussion View From Olympus. She has recorded Matre's Dance on her CDs Drumming and Greatest Hits (BMG), and she continues to commission new works.

A highlight of 2000 was the premiere of the Omnifenix at an outdoor concert before an audience of 8000 people at the 2 Agosto Festival in Bologna, Italy. This work was tailored to the particular improvising talents of tenor saxophonist Michael Brecker.

A retrospective concert of Psathas' chamber music was given in the 2000 New Zealand International Festival of the Arts, culminating with the premiere of the specially commissioned Piano Quintet. In the programme to the concert, he described the process of creating his music:

"When I write music, it's not a sense of inventing I experience, as much as it is a sense of finding something that exists at the remote periphery of what I know. It is like seeing things – that aren't really there – in the corner of one's eye, but not spinning around to view them, because then they would simply cease to be. It is a case of being aware of a thing in one's peripheral vision and, while staring straight ahead, trying to decipher, without looking at it, the true nature of what it is. What one is finding is exactly the right thing for any given moment in a musical work."

Highlights in 2002 included the premieres of several major works, including View From Olympus a double concerto for piano, percussion and orchestra performed by Evelyn Glennie, Philip Smith and the Halle Orchestra conducted by Mark Elder at the Royal Gala finale of the Commonwealth Games 'Pulse' music festival in Manchester, UK. This work was awarded New Zealand's major annual composition award for 2002, the SOUNZ Contemporary Award.

In 2003 a new CD of chamber works, Fragments, was released to critical acclaim and went on to win the Tui Award for Best Classical Recording at the New Zealand Music Awards. He was also named as the recipient of one of five Arts Foundation of New Zealand Artist Laureate Awards, which carry cash prizes of $40,000.

In 2004 Psathas achieved the largest audience for New Zealand-composed music when billions heard his fanfares and other music at the opening and closing ceremonies of the Athens Olympics. This high-profile work was recognised in New Zealand's New Year Honours by his appointment as an Officer of the New Zealand Order of Merit. Additionally, his Piano Concerto, premiered by the New Zealand Symphony Orchestra and soloist Stephen Gosling, was awarded the SOUNZ Contemporary Award for excellence in composition.

This article uses material from the article John Psathas from the free encyclopedia Wikipedia and it is licensed under the GNU Free Documentation License.