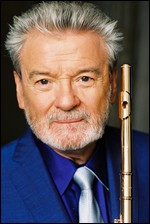 Sir James Galway, OBE (born 8 December 1939) is an Irish[1][2] virtuoso flute player from Belfast, nicknamed "The Man with the Golden Flute". Following in the footsteps of Jean-Pierre Rampal, he established an international career as a solo flute player.

Galway was born in East Belfast near the Belfast docks as one of two brothers. His father, who played the flute, was employed at the Harland and Wolff shipyard until the end of World War II and spent night-shifts cleaning buses after the war, while his mother, a pianist, was a winder in a flax-spinning mill. Surrounded by a tradition of flute bands and many friends and family members who played the instrument, he was taught the flute by his uncle at the age of nine and joined his Fife and drum corps; at the age of eleven he won the junior, senior, and open Belfast flute Championships in a single day. His first instrument was a five-key Irish flute, and at the age of twelve or thirteen, he received a Boehm instrument. He left school at the age of fourteen and worked as an apprentice to a piano repairer for two years.[3][4][5]

He subsequently went to London to study the flute at the Royal College of Music under John Francis and then at the Guildhall School of Music under Geoffrey Gilbert. He then studied at the Paris Conservatoire under Gaston Crunelle and Jean-Pierre Rampal and also privately with Marcel Moyse.

After his education he spent fifteen years as an orchestral player.[6]

He has played with Sadler's Wells Opera, Covent Garden Opera, the London Symphony Orchestra and the Royal Philharmonic Orchestra.[6] He auditioned for the Berlin Philharmonic Orchestra under Herbert von Karajan, and was principal flute of that orchestra from 1969 to 1975. To Karajan's surprise and dismay, after a period of some disagreement, Galway decided that he would leave to pursue a solo career.[7]

In addition to his performances of the standard classical repertoire, he features contemporary music in his programmes, including new flute works commissioned by and for him by composers including David Amram, Malcolm Arnold, William Bolcom, John Corigliano, John Wolf Brennan, Dave Heath, Lowell Liebermann and Joaquín Rodrigo. The album James Galway and The Chieftains in Ireland by Galway and The Chieftains reached number 32 in the UK Albums Chart in 1987.[8]

Galway still performs regularly and is one of the world's most well-known flute players. His recordings have sold over 30 million copies.[9]

In 1990, he was invited by Roger Waters to play at The Wall – Live in Berlin concert, held in Potsdamer Platz; he played Pink Floyd's songs "Goodbye Blue Sky" and "Is There Anybody Out There?". Galway performed for the Academy Award-winning ensemble recording the soundtracks of Peter Jackson's The Lord of the Rings film trilogy, composed by Howard Shore. In June 2008, he was inducted into the Hollywood Bowl Hall of Fame along with Liza Minnelli and B. B. King.

He currently performs on Nagahara flutes, as well as some Muramatsu Flutes. Conn-Selmer produces his line of flutes, "Galway Spirit Flutes".

Galway is president of Flutewise, a global charitable organisation that supports young flute players,[6][10] run by Liz Goodwin. In 2003 he formed the Music Education Consortium together with Julian Lloyd Webber, Evelyn Glennie, and Michael Kamen to pressure the British Government into providing better music education in schools. He is an Ambassador for the National Foundation for Youth Music, a UK charity.[11] He was made an Officer of the Order of the British Empire (OBE) in 1977, and was knighted in 2001,[6] the first wind player ever to receive that honour.[12] He is a National Patron of Delta Omicron, an international professional music fraternity.[13]

In December 2013 Galway launched First Flute, an online interactive series of lessons for beginning flute students of all ages.[14]

Galway has been married three times. His first marriage, to a Frenchwoman, produced a son. He married his second wife, Anna (Annie) Renggli, a daughter of a well-known Swiss architect, in 1972, and moved from Berlin to Lucerne, Switzerland, her hometown. The couple had twin daughters and a son. In 1978 he recorded for her an instrumental version of John Denver's "Annie's Song". It peaked at no. 3 in the UK Singles Chart.[4][8]

After their divorce he moved to Meggen, Switzerland, a village next to Lucerne, where he resides now with his third wife, the American-born Jeanne Galway (née Cinnante), whom he married in 1984. They often tour together playing duets. In addition, they give master classes for flutists of all levels.[16][17]

Galway is a dedicated Christian who visits various types of churches while travelling (as long as they are not modern and "happy-clappy") and prays before his concert performances.[18] He also wears a cross pendant, about which he says, "It's not jewellery. It's something that reminds me of what I should be doing and how I should be behaving."

In August 1977, Galway was run over by a large speeding motorcycle in Lucerne, breaking his left arm and both legs and requiring a four-month hospital stay.[3][4] He has the eye condition nystagmus, and is a patron of the Nystagmus Network, a UK-based support group for people with the condition.[19] On 23 December 2009, he fell down a flight of stairs at his home, fracturing his left wrist and shattering his right elbow.[20]

Appearing on The Nolan Show in June 2015, Galway stated that he views his national identity as Irish. He was critical of the actions of the Northern Irish government during his childhood, and singled out prominent Unionist figures such as Ian Paisley for fostering the division that led to The Troubles. His comments were criticised by prominent Unionist politicians, among them Sammy Wilson.[21] Describing Northern Ireland as "the British-occupied part of Ireland", Sir James further elaborated he would like "Ireland to be Ireland" and that when people ask him where he comes from he says "Ireland" and when asked if he is "Irish", he replies affirmatively.[2]

James's younger brother George Galway (born Belfast, 23 December 1940) is a jazz musician (clarinet, flute, and saxophone) and teacher based in Manchester, England. George's elder child and James's nephew, Martin Galway, is a musician known for his work on Commodore 64 computer game music in the 1980s.

NOTE: This list is far from complete. Earlier albums were re-released on CD in the late 1980s and early 1990s, some of these may be listed below by their CD release date rather than their original release.

This article uses material from the article James Galway from the free encyclopedia Wikipedia and it is licensed under the GNU Free Documentation License.