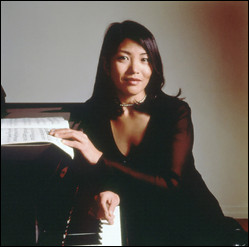 Cecile Licad (b. May 11, 1961) is a renowned Filipina virtuoso classical pianist dubbed as "a pianist's pianist" by The New Yorker, "her artistry, a blend of daring musical instinct and superb training." [1]

Cecile Buencamino Licad was born in Manila, Philippines to a musical family, she began her piano studies at the age of three from her mother, Rosario Licad. She later studied with the highly regarded Rosario Picazo, and by the age of seven, made her debut as a soloist with the Philippine Philharmonic Orchestra.

At the age of twelve, Cecile moved to the United States to study at the Curtis Institute of Music with three of the greatest performers/pedagogues: Rudolf Serkin, Seymour Lipkin and Mieczyslaw Horszowski.[2]

Cecile Licad's repertoire as a solo performer and an orchestral soloist ranges from the classical repertoire of Mozart and Beethoven to the Romantic literature of Brahms, Tchaikovsky, Schumann and Rachmaninoff to the modern works of Debussy, Ravel, Shostakovich, Prokofiev and Bartók.

As an accomplished chamber musician, Cecile has appeared on television with Mstislav Rostropovich and has performed with ensembles such as the New York Chamber Symphony, St. Paul Chamber Orchestra, Guarneri Quartet, Takács Quartet, The Chamber Music Society of Lincoln Center, and Music from Marlboro. She also appeared as guest soloist on a European tour with the Orpheus Chamber Orchestra. She has performed in recital with Murray Perahia, Peter Serkin and Nadja Salerno-Sonnenberg, with whom she has appeared at Lincoln Center, Orchestra Hall in Chicago, and the Kennedy Center in Washington, D. C.. She performs regularly with cellist Alban Gerhardt, performing throughout Europe and the United States, including at the Frick Collection in New York City.

She appeared as a soloist in the Steinway Piano Sesquicentennial Celebration at Carnegie Hall in June 2003 performing six Rachmaninoff Songs with operatic tenor Ben Heppner.

In March 2007, she had a special performance together with her then 19-year old son Ottavio L. Meneses, also a pianist, at the Cultural Center of the Philippines.[4]

This article uses material from the article Cecile Licad from the free encyclopedia Wikipedia and it is licensed under the GNU Free Documentation License.

Creep Karen Souza
Update Required To play the media you will need to either update your browser to a recent version or update your Flash plugin.