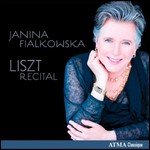 Janina Fialkowska, (born May 7, 1951) is a Canadian classical pianist.

Fialkowska was born in Montreal, Quebec, Canada, to a Canadian mother (Bridget Todd Fialkowski) and a Polish father (Jerzy Fialkowski), an engineer and Polish army officer who emigrated to Canada in 1945. Her mother was descended from an old Canadian family of Scottish-Irish and Cree (aboriginal) stock, who studied piano in the class of Alfred Cortot at the École Normale de Musique de Paris (1935-1939). Fialkowska is the Granddaughter of Dr. John Todd, Canadas first Professor of Parasitology,[1] and Great-granddaughter of Sir Edward Clouston, President of the Canadian Bankers Association. She is the Cousin of Canadian Politician and former cabinet minister David Anderson and cousin of stage and screen actor Christopher Plummer.[2]

Fialkowska began to study piano at age 4 with her mother and in 1960 enrolled in the École Vincent-dIndy in Montreal. In 1963, at the age of 12, she made her debut as a soloist with the Montreal Symphony Orchestra and began studying with Yvonne Hubert. She pursued her secondary education at the prestigious Montreal girls school The Study, graduating in 1967. The following year, at the age of 17, she simultaneously obtained undergraduate (Baccalauréat) and Maitrise from the Université de Montréal. During this period, she also studied in Paris with virtuoso and teacher Yvonne Lefébure (1966, 1968-1969). In 1969 she was awarded 1st Prize in the CBC National Radio Competition for Young Performers in Canada and travelled occasionally to New York City for private studies with Sasha Gorodnitzki. In 1970, she settled in New York and enrolled in the Juilliard School of Music as a student of Sasha Gorodnitzki, later becoming his teaching assistant from 1979-1984. Following her prize-winning performance at the inaugural Arthur Rubinstein International Piano Master Competition held in Tel Aviv in 1974, Arthur Rubinstein became her mentor and launched her international career.[3]

A specialist of the Classic and Romantic repertoires, Janina Fialkowska has garnered especially high praise for her interpretations of the works of Chopin and Liszt. For the past thirty years, she has also championed the music of contemporary Polish composers like Lutoslawski, Panufnik and Mozetich.

Her numerous solo recital tours have taken her to leading concert halls throughout Europe, the United States, Canada, and the Far East.

In January 2002, on the eve of a European concert tour encompassing eight countries, Fialkowskas career was suddenly brought to a halt by the discovery of an aggressive cancerous tumour in her upper left arm. Following the removal of the malignant mass in May 2002, she subsequently underwent an innovative surgical procedure designed to reconstruct the arm that had been rendered almost useless by the excision of the tumour. During her eighteen months of convalescence, she gave numerous concerts in Europe and North America, performing music written especially for the left hand by Ravel (Concerto for the Left Hand) and Prokofiev (Piano Concerto no. 4), which she adapted for performance with the right hand. Both the public and the critics were unanimous in their admiration of her courage and the high calibre of these unusual and challenging performances[4] for example with the Houston Symphony Orchestra under Stanislaw Skrowaczewski. In 2004, Fialkowska made a triumphant return to the stage as a two-handed pianist, first with a highly anticipated recital in Germany,[5] followed by Beethovens Fourth Piano Concerto in Toronto.[6] Since then, she has resumed active touring in Canada, the United States, Europe, and the Far East performing amongst others with the Warsaw Philharmonic,[7] the Montreal Symphony,[8] the Toronto Symphony, the Suk Chamber Orchestra Prague,[9] the Vancouver Symphony,[10] the Detroit Symphony, the Royal Philharmonic Orchestra,[11] the Mexico State Orchestra, Lorchestra di Camera Italiana,[12] the Badische Staatskapelle,[13] the Osaka Philharmonic[14] and many others.

In the summer of 2010, Fialkowska hosted a celebration of the works of Chopin at the Festival of the Sound.[15]

Janina Fialkowska is married to German music manager Harry Oesterle (since 2001). They have homes in the United States (Connecticut) and Germany (Bavaria).

Janina Fialkowska was the founder and first Artistic Director of Piano Six, a not-for-profit educational outreach program dedicated to keeping classical music alive in small communities throughout Canada. In 1993, Fialkowska convinced five of Canadas most distinguished classical pianists to join with her in taking time off from their busy international careers to tour to outlying communities that rarely, if ever, figure on the itinerary of the worlds top musicians. In order to serve as many communities as possible, Fialkowska and the other Piano Six artists agreed to perform for a fraction of their usual fees. During its decade of operation (1993-2003), this award-winning program sent its artists on more than 60 regional tours, reaching over 100,000 Canadian music fans of all ages with their live performances, masterclasses and teachers workshops. In 2004, in order to broaden the scope of its activities, the Piano Six roster was expanded to include top-flight Canadian musicians from the fields of strings and voice as well as piano. Under the banner of Piano Plus, the new programs associated artists continue to tour the length and breadth of Canada each season.[16]

Janina Fialkowska is an active and highly acclaimed recording artist. Two of her recordings were nominated by the Canadian music industry for a Juno Award: her 1997 CD Fialkowska plays Szymanowski (ODR 9305) and her 1998 recital of virtuoso salon pieces La Jongleuse (CBC MVCD 1114). Her 2001 recording of Liszts Transcendental Études (ODR 9332) earned the Critics Choice award from American Record Guide. She has also recorded the Liszt Sonata (for RCA) and discs of various works by Chopin (for Atma Classique).

Recordings by Janina Fialkowska have been the victim of a form of art theft. In 2007, it was discovered that some recordings originally attributed to the deceased pianist Joyce Hatto (1928-2006) contained tracks that had been plagiarized from recordings by other artists. Two pieces from Fialkowskas 1990 CD of works by Franz Liszt Mephisto Waltz and Venezia e Napoli were amongst the tracks that were fraudulently represented as having been recorded by Hatto. The discovery of these and other plagiarized tracks led to one of the biggest scandals that has ever occurred in the classical music recording business.[23][24]

This article uses material from the article Janina Fialkowska from the free encyclopedia Wikipedia and it is licensed under the GNU Free Documentation License.

The Very Thought Of You Gail Pettis
Update Required To play the media you will need to either update your browser to a recent version or update your Flash plugin.