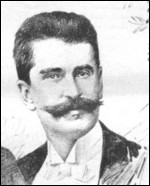 Leo Stein, born Leo Rosenstein (25 March 1861, Lemberg 28 July 1921, Vienna, Austria) was a playwright and librettist of operettas in the latter part of the 19th and early 20th centuries, including works adapted for a number of Broadway productions.

Stein is buried at the Vienna Zentralfriedhof.

This article uses material from the article Leo Stein (writer) from the free encyclopedia Wikipedia and it is licensed under the GNU Free Documentation License.

Ghetto Child Shemekia Copeland
Update Required To play the media you will need to either update your browser to a recent version or update your Flash plugin.