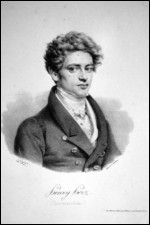 Henri Herz (6 January 1803 – 5 January 1888) was a pianist and composer, Austrian by birth and French by domicile. He was also a music teacher at the Paris Conservatoire. Among his major works are eight piano concertos, a piano sonata, rondos, nocturnes, waltzes, marches, fantasias, and numerous sets of variations.

Herz was born Heinrich Herz in Vienna. He was Jewish by birth, although he asked the musical journalist François-Joseph Fétis not to mention this in the latter's musical encyclopaedia,[1] perhaps a reflection of endemic antisemitism in nineteenth-century French cultural circles. As a child he studied with his father, and in Koblenz with the organist Daniel Hünten. In 1816 he entered the Paris Conservatoire, where he studied under Victor Dourlen and Anton Reicha. His brother Jacques Herz (1794–1880) was a fellow-pupil at the Conservatoire who also became a pianist and teacher.

Herz was married to Pauline Thérèse Lachmann (or Esther Lachmann), a French courtesan known as La Païva. It is generally believed that they married in London, but it is not clear that this actually occurred. In any case, such a marriage would have been bigamous. By him she had a daughter. Richard Wagner, Hans von Bülow, Théophile Gautier and Émile de Girardin attended her salon. Her spendings nearly ruined Herz's finances, and he traveled to America in 1848 to pursue business opportunities. While he was away, her spending continued, and Herz's family turned Thérèse out of the house in frustration. In 1830, he founded his own piano factory in Paris. In 1838, he built the Salle Herz on the rue de la Victoire, used for performances by Berlioz and Offenbach.[2] He died in Paris aged 84.

Career as a pianist

A celebrated pianist, Herz traveled worldwide, including tours in Europe, Russia, Mexico, South America, and in the United States of America between 1846 and 1850, where he concertized all the way to San Francisco. His performances were compared to the more extravagant manner of Leopold de Meyer, concertizing in the United States during the same period (1845–47).[3] He wrote a book about his experiences abroad, Mes voyages en Amérique (Paris: Achille Faure, 1866), translated by Henry Bertram Hill as My Travels in America (1963).

Herz composed many pieces including eight piano concertos. Among his many musical works, he was involved in the composition of Hexaméron (the fourth variation on Bellini's theme is his). Many, however, found his piano style showy and shallow, and Robert Schumann was among those who criticized it.[4]

Herz was also an inventor of a mechanical device he named a dactylion, designed to loosen and strengthen pianist's fingers.[5] The device consisted of two parallel wooden bars, where the bottom one could be attached under a keyboard to fix the dactylion in place; and the top bar had ten rings hanging on strings for individual fingers to provide certain resistance while playing the piano. The dactylion had a considerable success then.[6] He patented dactylion in France in 1835. In 1843-1866 he also registered several patents related to construction and fabrication of pianos.[7]

This article uses material from the article Henri Herz from the free encyclopedia Wikipedia and it is licensed under the GNU Free Documentation License.

They Say It's Wonderful Chuck Redd
Update Required To play the media you will need to either update your browser to a recent version or update your Flash plugin.