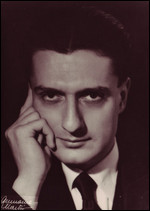 Dinu Constantin Lipatti (Romanian pronunciation: [ˈdinu liˈpati] ( listen); 1 April [O.S. 19 March] 1917 – 2 December 1950) was a Romanian classical pianist and composer whose career was cut short by his death from causes related to Hodgkin's disease at age 33. He was elected posthumously to the Romanian Academy.

Constantin Lipatti (from childhood called by the diminutive "Dinu") was born in Bucharest into a musical family: his father was a violinist who had studied with Pablo de Sarasate and Carl Flesch,[1] his mother a pianist. For his baptism, which occurred not shortly after birth as is usual, but when he was old enough to play the piano, the violinist and composer George Enescu agreed to be his godfather. Lipatti played a minuet by Mozart at his own baptism.[1]

He studied at the Gheorghe Lazăr High School, while studying piano and composition with Mihail Jora for three years. He then attended the Bucharest Conservatoire, studying under Florica Musicescu, who also taught him privately.[1] In June 1930, the best pupils at the Conservatoire gave a concert at the Bucharest Opera, and the 13-year-old Lipatti received a huge ovation for his performance of the Grieg Piano Concerto in A minor.[1] In 1932 he won prizes for his compositions: a Piano Sonatina, and a Sonatina for Violin and Piano. That year he also won a Grand Prize for his symphonic suite Les Tziganes.[1]

He entered the 1933 Vienna International Piano Competition but finished second to Polish pianist Bolesław Kon, some say controversially. Alfred Cortot, who thought Lipatti should have won, resigned from the jury in protest.[2] Lipatti subsequently studied in Paris under Cortot, Nadia Boulanger (with whom he recorded some of Brahms's Waltzes Op. 39), Paul Dukas (composition) and Charles Munch (conducting). At eighteen, Lipatti gave his recital debut in Paris at the École Normale. On 17 May 1935, three days before the concert, his friend and teacher, Paul Dukas, died and in his memory Lipatti opened his program with J. S. Bach's Jesu, Joy of Man's Desiring in the transcription by Myra Hess,[1] the first piece he publicly performed as an adult pianist.

Lipatti's career was interrupted by World War II. Although he gave concerts across the Nazi-occupied territories, as the war grew closer he fled his native Romania in September 1943 with his companion and fellow pianist, Madeleine Cantacuzene. With the aid of Edwin Fischer he emigrated to Geneva, Switzerland where he accepted a position as professor of piano at the Geneva Conservatory.[3] It was at this time that the first signs of his illness emerged. At first, doctors were baffled, but in 1947 he was diagnosed with Hodgkin's disease.[4]

He and Madeleine eventually married in 1948 but Lipatti's health continued to decline.[3] As a result, his public performances became considerably less frequent after the war. His energy level was improved for a time by then experimental injections of cortisone and his collaboration with record producer Walter Legge between 1947 and 1950 resulted in the majority of the recordings of Lipatti's playing.[5]

Lipatti gave his final recital, also recorded, on 16 September 1950 at the Besançon Festival in France. Despite severe illness and a high fever, he gave superb performances of Bach's Partita No. 1 in B-flat major, Mozart's A minor Sonata, K. 310, Schubert's G-flat major and E-flat major Impromptus, Op. 90, and thirteen of the fourteen Chopin Waltzes which he played in his own integral order. Coming to the last one, No. 2 in A-flat, he found he was too exhausted to play it and he offered instead Jesu, Joy of Man's Desiring, the piece with which he had begun his professional career only fifteen years before. He died less than 3 months later in Geneva aged 33, from a burst abscess on his one lung.[4] Lipatti is buried at the cemetery of Chêne-Bourg next to his wife Madeleine (1908-1982), a noted piano teacher.

Lipatti's piano playing was, and is, widely appreciated for the absolute purity of his interpretations, at the service of which he used a masterful pianistic technique. Lipatti is particularly noted for his interpretations of Chopin, Mozart and Bach, but he also made recordings of Ravel's Alborada del Gracioso, Liszt, Enescu, and the Schumann and Grieg piano concertos. His recording of Chopin's Waltzes has remained in print since its release and has long been a favorite of many classical music-lovers.

Lipatti never recorded any music of Beethoven. It is a common misconception, however, that Lipatti did not perform Beethoven's music until late in his career. The Waldstein Sonata had been a feature of Lipatti's repertoire since 1935. He also performed the Emperor Concerto in Bucharest twice during the 1940–41 season, and even stood ready to record it for EMI in 1949. An internal memo from Lipatti's recording producer Walter Legge, dated 23 February 1948, states that "Lipatti ha[d] his heart set on doing a Beethoven Concerto in 1949" and nominates the Emperor Concerto, given that Lipatti had already performed it.

A recording of Chopin's Piano Concerto No. 1 in E minor, originally released under Lipatti's name, and said to have been a recording of a live performance in Switzerland in May 1948, proved not to be his contribution at all. In 1981, it emerged that the soloist on this recording was in fact a Polish pianist (and a fellow Cortot pupil), Halina Czerny-Stefańska, the joint winner of the 4th International Chopin Piano Competition, playing with the Czech Philharmonic Orchestra under Václav Smetáček. However, later on, an authentic recording by Lipatti of the Chopin Concerto was found.[6]

Harold C. Schonberg wrote in 1953 "Lipatti, a master of the keyboard, would have developed into one of the supreme artists of this era. He was a pianist of the Rachmaninoff order, blessed with an enormous technique and a strong rhythmic sense."[7]

In recognition of his outstanding contributions to classical music interpretation and composition he was posthumously elected in 1997 as a member of the Romanian Academy.[8] In 2005, The Mountain Goats released a song in his honor, titled "Dinu Lipatti's Bones".[9]

In addition to his pianistic accomplishments, Lipatti was a composer, who wrote in a neoclassical style with French and Romanian influences. His works include:

This article uses material from the article Dinu Lipatti from the free encyclopedia Wikipedia and it is licensed under the GNU Free Documentation License.

I Remember Clifford Art Blakey
Update Required To play the media you will need to either update your browser to a recent version or update your Flash plugin.