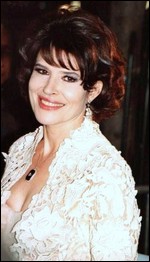 Fanny Marguerite Judith Ardant (born 22 March 1949) is a French actress. She has appeared in more than fifty motion pictures since 1976. Ardant won the César Award for Best Actress in 1997 for her performance in Pédale douce.

Ardant was born in Saumur Maine-et-Loire, France, to a military attaché father.[1] She grew up in Monaco until age 17 when she moved to Aix-en-Provence to study at the Institut d'études politiques d'Aix-en-Provence. In her early twenties her interest turned to acting and in 1974 she made her first appearance on stage.

By the early 1980s she was a major motion picture star, gaining international recognition for her role opposite Gérard Depardieu in La Femme d'à côté (The Woman Next Door).[2] The film, directed by François Truffaut, brought Ardant her first César Award nomination for best actress in 1982 and in 1984 she was nominated again for Vivement dimanche!. Eventually she became Truffaut's companion, giving birth to their daughter, Joséphine Truffaut, on 28 September 1983. Initially, her youthful beauty brought popularity but over time her sophistication and acting skills have made her one of France's most admired actresses.[3] She proved her versatility, playing a comedic role in Pédale douce for which she won the 1997 César Award for Best Actress.

Fluent in English and Italian, Ardant has starred in several Hollywood and British films. Her most recent English-language film was the Franco Zeffirelli production Callas Forever, in which she portrayed opera diva Maria Callas. It opened the 14th Annual Palm Springs International Film Festival on 9 January 2003. In 2003, Ardant received the Stanislavsky Award at the 25th Moscow International Film Festival (for the outstanding achievement in the career of acting and devotion to the principles of Stanislavsky's school).[4]

In 2009, she became a director and screenwriter, with Cendres et sang (Ashes and Blood). She also took part in a rare performance of Sardou's La Haine on 19 July 2009 at the Festival de Radio France et Montpellier Languedoc Roussillon, with Gérard Depardieu, the concert broadcast on France Musique.[5]

In 2011, she starred in the music video for Elle me dit, the first French single by Lebanese singer Mika, and appeared in the play based on Joan Didion's 2005 novel The Year of Magical Thinking in the Théâtre de l'Atelier, Paris.

In 2013, she made a cameo appearance as herself in The Great Beauty.[6]

She once expressed admiration for Renato Curcio, ex leader of the militant Red Brigades (Brigate Rosse), saying that it was good of him to adhere to his principles. She later discovered that it would be difficult to attend a film festival in Venice, as her declaration had created much scandal in Italy.[7] The Governor of Veneto said that he would prefer that Ardant not visit his region. She then pleaded for forgiveness from victims of terrorism.[8][9]

This article uses material from the article Fanny Ardant from the free encyclopedia Wikipedia and it is licensed under the GNU Free Documentation License.