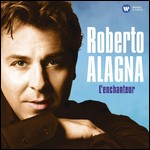 Alagna was born outside the city of Paris in 1963 to a family of Sicilian immigrants. As a teenager, the young Alagna began busking and singing pop in Parisian cabarets,[3] mostly for tips.[4] Influenced primarily by the films of Mario Lanza and learning from recordings of many historic tenors, he then switched to opera, but remained largely self-taught.[5][6] He was discovered by Gabriel Dussurget, the co-founder of the Aix-en-Provence Festival.[7]

After winning the Luciano Pavarotti International Voice Competition, an initiative backed by the Italian Ministry of Cultural Heritage and Activities, that started in Modena in 1988, Alagna made his professional debut as Alfredo Germont in La traviata with the Glyndebourne touring company.[8] This led to many engagements throughout the smaller cities in France and Italy, mainly again as Alfredo, a role he would eventually sing over 150 times. His reputation grew and he was soon invited to sing at major theatres such as La Scala in 1990, Covent Garden in 1992 and the Metropolitan Opera as Rodolfo in 1996. His performances of Roméo in Roméo et Juliette by Charles Gounod at Covent Garden in 1994 (opposite Leontina Vaduva) catapulted him to international stardom.[9]

Alagna opened the 2006/07 season at La Scala on 7 December 2006 in the new production of Aida by Franco Zeffirelli. During the second performance on 10 December, Alagna, whose opening performance was considered ill-at-ease, was booed and whistled from the loggione (the least expensive seats at the very back of La Scala), and he walked off the stage. The tenor's reaction to his public criticism was denounced as immature and unprofessional by La Scala management and Zeffirelli, who said, "A professional should never behave in this way. Alagna is too sensitive, it is too easy to hurt his feelings. He does not know how to act like a true star."[10] The role of Radames was taken over successfully for the rest of the performance by his understudy Antonello Palombi, who entered on stage wearing jeans and a black shirt.[11]

In 2007 while at the Metropolitan Opera singing the role of Pinkerton in Madama Butterfly, Alagna replaced the indisposed tenor Rolando Villazón as Romeo in Roméo et Juliette opposite soprano Anna Netrebko for two performances in September and two performances in December. His wife had flown to New York to be with him for the September engagements, and as a result was fired from the Lyric Opera of Chicago for missing her rehearsal dates for La bohème. Alagna was also engaged by the Metropolitan Opera at the last minute to cover for the indisposed Marco Berti in a 16 October 2007 performance of Aida. After the performance, the audience gave him a standing ovation.[12] The 15 December performance of Roméo et Juliette starring Alagna and Netrebko was broadcast by the Met into 447 theatres worldwide in high definition and seen by about 97,000 people.[13]

Alagna was scheduled to make his debut at the Bayreuth Festival on opening day, 25 July 2018, in the title role of a new production of Richard Wagner's Lohengrin. Alagna withdrew from the festival on 29 June 2018 citing failure to learn the role in time.[14]

Alagna's first wife, Florence Lancien, died of a brain tumour in 1994; they had one daughter, Ornella, who was born in 1992. In 1996, he married Romanian soprano Angela Gheorghiu.[15] The couple announced a divorce in 2009, but had reunited by 2011. However, in January 2013, the couple mutually agreed on a formal divorce.[16] Alagna and the Polish soprano Aleksandra Kurzak had begun a relationship, and their daughter, Malena, was born on 29 January 2014.[17]

Alagna has worked together on several projects with his brothers Frédérico Alagna and the stage director and composer David Alagna. The three brothers recorded an album of light music, Serenades, and worked together on the younger brother David's opera based on Hugo's Last Day of a Condemned Man. Alagna has often sung Alfano's Cyrano opposite his sister-in-law Nathalie Manfrino as Roxanne.

The government of France named Alagna a Chevalier de la Légion d'honneur in 2008.

This article uses material from the article Roberto Alagna from the free encyclopedia Wikipedia and it is licensed under the GNU Free Documentation License.

Windmills Of Your Mind Sting
Update Required To play the media you will need to either update your browser to a recent version or update your Flash plugin.