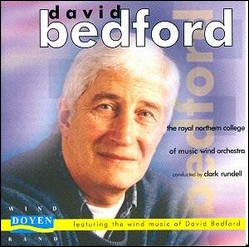 David Vickerman Bedford (4 August 1937 1 October 2011[1]) was an English composer and musician. He wrote and played both popular and classical music.

From 1969 to 1981, Bedford was Composer in Residence at Queen's College, London. From 1968 to 1980, he taught music in a number of London secondary schools. In 1996 he was appointed Composer in Association with the English Sinfonia. In 2001 he was appointed Chairman of the Performing Right Society, having previously been Deputy Chairman.

Bedford was educated at Lancing College, then as a conscientious objector he worked as a porter at Guy's Hospital.

Bedford studied music at the Royal Academy of Music under Lennox Berkeley, and later in Venice under Luigi Nono. His studies and early influences included the work of Nono, Paul Hindemith, Arnold Schoenberg and Anton Webern.[5]

In 1969, Bedford was engaged to orchestrate Kevin Ayers' album Joy of a Toy, on which he also played keyboards. This led to his role as keyboardist for Ayers' band, Kevin Ayers and the Whole World, who recorded one album, Shooting at the Moon (1970). On that album, in addition to organ and piano, Bedford plays accordion, marimbaphone and guitar. Bedford also contributed to later Kevin Ayers albums as keyboardist and orchestral arranger.

Bedford was a former president of the Severnside Composers' Alliance.[6]

Bedford's work with The Whole World led to collaborations with the group's saxophonist Lol Coxhill, with whom he formed the Coxhill-Bedford Duo. The Duo released several singles of old vaudeville and British music hall songs featuring Bedford on piano and lead vocal, and Coxhill on saxophone and second vocal, for John Peel's Dandelion Records label in the early 1970s. One of these singles was released under the pseudonym, Will Dandy and the Dandylettes (covering a medley of Al Jolson songs), with the B-side credited to the Coxhill-Bedford Duo. More tracks by the Duo appear on Coxhill's solo album, Ear of Beholder (1971) on which they play three songs, including an early version of "Don Alfonso" which Bedford would record again later. Still more Coxhill-Bedford Duo songs can be found on Banana Follies, a 1972 BBC concert radio broadcast featuring Kevin Ayers, released on CD in 1998. In that broadcast, Bedford and Coxhill also perform a short radio play titled "Murder in the Air". Coxhill later re-recorded the play without Bedford and released it as a 12-inch single, stating in the liner notes that he would have preferred to record it with Bedford, who was unavailable.

The first album to consist entirely of David Bedford compositions was Nurses Song With Elephants, recorded at the Marquee Studios, and released in 1972 on John Peel's Dandelion label. On this album, Bedford mixed classical ensemble with poems and voices. Some Bright Stars for Queen's College uses twenty-seven plastic pipe twirlers, John Peel himself being among the pipe twirler players. There are five tracks on the album: It's Easier Than It Looks, Nurses Song With Elephants, Some Bright Stars for Queen's College, Trona (1967), and Sad and Lonely Faces. Bass guitar on the title song is played by Mike Oldfield and the final track features a poem by Kenneth Patchen that is sung by Kevin Ayers.

Bedford collaborated even more extensively with Mike Oldfield, The Whole World's bass guitarist. He orchestrated and conducted Oldfield's The Orchestral Tubular Bells album (1975),[7] an adaptation of Tubular Bells, the record that had given the Virgin record label its first major success in 1973. Bedford also orchestrated Oldfield's follow-up album-length composition, Hergest Ridge (1974) as The Orchestral Hergest Ridge, which was performed live and recorded for radio broadcast from concert performances twice, once in 1974 by the Royal Philharmonic Orchestra with Steve Hillage on guitar, and once in 1976 by the Scottish National Orchestra, again with Hillage on guitar, although Andy Summers had played on other performances that year.[8][9] The latter recording was acquired by Virgin, but not released as an album, although portions of it were used in The Space Movie (1979) which featured Oldfield's music.

Bedford provided vocals and piano for Oldfield's cover versions of more old music hall numbers (in the manner of the now-defunct Coxhill-Bedford Duo), Don Alfonso (1974) and Speak (Tho' You Only Say Farewell) (1976), collaborated with Oldfield on a piece titled "First Excursion" for Oldfield's box set compilation Boxed, and orchestrated Oldfield's soundtrack for The Killing Fields (1984). In 1983, Oldfield created a short-lived record label called Oldfield Music whose sole release was a David Bedford album, Star Clusters, Nebulae and Places in Devon / The Song of the White Horse.

Bedford's association with Oldfield led to a record contract to make a number of albums for Virgin, some using orchestral players, others featuring Bedford's keyboards, and some include Oldfield as a featured performer. Album titles from this period include Star's End (1974), The Rime of the Ancient Mariner (1975, a musical setting of the poem by Samuel Taylor Coleridge), The Odyssey (1976, a musical setting of the poem by Homer), and Instructions for Angels (1977), the latter including an appearance by Mike Ratledge.

Bedford contributed to records by the Edgar Broughton Band, including a single titled Up Yours!, a polemic on the 1970 UK general election declaring their intention to drop out. The single features a string arrangement by Bedford.

Bedford worked on several Roy Harper projects, including the 1971 four-song album Stormcock which also featured Jimmy Page on guitar (credited as S. Flavius Mercurius for contractual reasons), and the 1974 album Valentine. Bedford also conducted an orchestra during Harper's live concerts, including the Valentine's Day launch of the album, the concert later released as Flashes from the Archives of Oblivion and featuring, among others, Keith Moon. In 2001 he was reunited with Harper when the latter celebrated his 60th birthday with a concert at London's Royal Festival Hall, joined by numerous guest artists, including Jeff Martin and John Renbourn. A recording of the concert Royal Festival Hall Live - June 10th 2001 was released as a double CD shortly afterwards.

All this time, Bedford was also writing avant-garde classical works. The liner notes from a 1970 album cite Piece for Mo (1963) as "his first work of standing",[5] although that piece has never been recorded for release.

O Now the Drenched Land Wakes and The Great Birds (two poems for chorus based on the words of Kenneth Patchen, 1966) were released by Deutsche Grammophon on one of their Avant Garde series of albums in 1968.

Music for Albion Moonlight was released in 1970 by Argo Records, paired with a companion composition, And Suddenly It's Evening by Elisabeth Lutyens.

In With 100 Kazoos (1971), an instrumental ensemble is joined by the audience who are invited to play kazoos.

Bedford also composed a number of works for wind orchestra, beginning with Sun Paints Rainbows on the Vast Waves in 1982, commissioned by the Huddersfield Contemporary Music Festival.[11] Many of these works have recorded by the wind orchestra of the Royal Northern College of Music, conducted by Clark Rundell, released by Doyen Records UK in 1998.[12]

Bedford combined skilled and non-skilled musicians in other works as well, with Seascapes (1986), for instance, combining a full symphony orchestra with school children, and Stories from the Dreamtime (1991) written for 40 deaf children and orchestra. This awareness of the need to enrich the musical life of children is evident at the SAGE Gateshead which will be performing one of his latter works for young people titled The Wreck of the Titanic This continues his belief in including non professional musicians, such as the choirs from four North East primary/junior schools.

He is noted for the large amount of educational music he has written for children. The musical notation he uses is often unconventional, frequently making use of graphics, thus letting his works be performed by children and others who cannot read conventional notation. For example, in the liner notes to the album Viola Today (1974) by Karen Phillips, it is stated that in the score of Bedford's Spillihpnerak (1972) (the title being the performer's name printed backwards) there is "(a) page consisting of a drawing of a lysozyme molecule which the performer is asked to interpret".[13]

In general, Bedford's music has a tendency to harmonic stasis, the main interest instead being created by shifting timbres and textures. The score to The Song of the White Horse (1978)[14][15] instructs the choir to inhale helium gas to be able to reach the highest notes near the end of the piece.[16]

In his music for voice, he has set many texts by the poet Kenneth Patchen, especially on Music for Albion Moonlight which sets four Patchen poems to music, and Instructions for Angels (1978), an album which uses Patchen's poems for inspiration and song titles, although Patchen's poems are not sung or recited in the music, but are printed on an insert.

Science fiction was a repeated area of interest for Bedford. The Tentacles of the Dark Nebula has words taken from Arthur C Clarke's short story Transcience,[17] recorded by tenor Peter Pears with Bedford conducting the London Sinfonietta. The title of Star's End was taken from Isaac Asimov's book Second Foundation.[18] Rigel 9 is a play based on the book by Ursula K. Le Guin, featuring background music composed and recorded by Bedford.[19]

This article uses material from the article David Bedford from the free encyclopedia Wikipedia and it is licensed under the GNU Free Documentation License.

Get Out Of Town Rosemary Clooney
Update Required To play the media you will need to either update your browser to a recent version or update your Flash plugin.