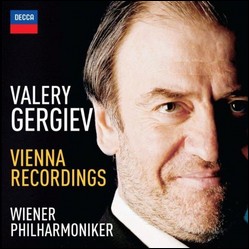 Gergiev, born in Moscow, is the son of Tamara Tatarkanovna and Abisal Zaurbekovich.[1] He and his siblings were raised in Vladikavkaz in their native North Ossetia in the Caucasus. He had his first piano lessons in secondary school before going on to study at the Leningrad Conservatory from 1972 to 1977. His principal conducting teacher was Ilya Musin ( ), one of the greatest conductor-makers in Russian musical history. His sister, Larissa Gergieva, is a pianist and director of the Mariinsky's singers' academy.[2]

In 1978, he became assistant conductor at the Kirov Opera, now the Mariinsky Opera, under Yuri Temirkanov, where he made his debut conducting Sergei Prokofiev's War and Peace. He was chief conductor of the Armenian Philharmonic Orchestra from 1981 to 1985 the year he made his debut in the United Kingdom, along with pianist Evgeny Kissin and violinists Maxim Vengerov and Vadim Repin at the Lichfield Festival.

In 1991, for the first time, Gergiev conducted a western European opera company with the Bavarian State Opera in a performance of Modest Mussorgsky's Boris Godunov in Munich. In the same year, he made his American début, performing War and Peace with the San Francisco Opera. Since then, he has conducted both operatic and orchestral repertoire across the world. He also participates in numerous music festivals, including the White Nights in St. Petersburg.

From 1995 to 2008, Gergiev was principal conductor of the Rotterdam Philharmonic Orchestra. In 1997, he became principal guest conductor of the Metropolitan Opera in New York City. His contract there ran until the 2007-2008 season, and his premieres included a new version of Mussorgsky's Boris Godunov, revised and reorchestrated by Igor Buketoff in a manner faithful to Mussorgsky's intentions (unlike the Rimsky-Korsakov revision mostly used for many years until the 1960s or 1970s).

In 2002, he was featured in one scene in the film Russian Ark, directed by Alexander Sokurov and filmed at the Hermitage Museum in Saint Petersburg, Russia.

In 2003, he initiated and conducted at the Mariinsky Theatre the first complete cycle of Wagner's The Ring of the Nibelung to be staged in Russia for over 90 years. The production's design and concept reflects many aspects of Ossetian culture. Gergiev conducted this production in Cardiff in 2006 at the Wales Millennium Centre, in Costa Mesa, California in October 2006 in the Orange County Performing Arts Center, and in July 2007 in Lincoln Center, New York City to great acclaim and completely sold-out houses.

In 1988, Gergiev guest-conducted the London Symphony Orchestra for the first time. In his next appearance with the LSO in 2004, he conducted the seven symphonies of Sergei Prokofiev.[4] This engagement led to his appointment in 2005 as the Orchestra's fifteenth principal conductor, succeeding Sir Colin Davis effective 1 January 2007.[5] Gergiev's initial contract with the LSO was for 3 years.[6] His first official concert as principal conductor of the LSO was on 23 January 2007; this was originally scheduled for 13 January, but was postponed due to Gergiev's illness.[7] In January 2013 he let it be known that he would be stepping down from the LSO position at the end of his contract at the end of 2015.[8]

In October 2007, he took part in a Christmas project featured in the 100th anniversary issue of the Neiman Marcus Christmas Book. A concert by Gergiev and the Kirov Orchestra featuring piano virtuoso Lola Astanova became a part of a $1.59 million fantasy gift. The super-concert was said to be hosted by the Emmy-winning American television personality Regis Philbin.[9]

In June 2011, Gergiev assumed a reformist role as chairman of the International Tchaikovsky Competition. He replaced academic judges with notable performers and introduced an openness to the process, arranging for all performances to be streamed live and free on the internet and for the judges to speak their minds in public as and whenever they wished. Journalist Norman Lebrecht told Gergiev that he "had changed the music world forever" in doing so, by "introducing perestroika to the Tchaikovsky Competition.... No self-respecting contest will ever take place again behind closed doors."[10]

Gergiev's conducting style is considered by many to be abrasive yet passionate.[11] He is thought of as a "driven" conductor who is at his best in highly dramatic works. He "has been criticised for skimping on rehearsal and detail."[12] He often conducts using a toothpick for a baton. He said his favorite composer was Sergei Prokofiev in his DVD recording of Prokofiev's Scythian Suite.

In April 2007, Gergiev was one of eight conductors of British orchestras to endorse the 10-year classical music outreach manifesto, "Building on Excellence: Orchestras for the 21st century", to increase the presence of classical music in the UK, including giving free entry to all British schoolchildren to a classical music concert.[13]

After the 2004 Beslan school massacre, Gergiev appealed on television for calm and against revenge. He conducted concerts to commemorate the victims of the massacre.[14]

During the 2008 South Ossetia war, Gergiev accused the Georgian government of massacring ethnic Ossetians, triggering the conflict with Russia.[15] He came to Tskhinvali and conducted a concert near the ruined building of the South Ossetian Parliament as tribute to the victims of the war.[16]

Gergiev has been, according to Alex Ross in The New Yorker, "a prominent supporter of the current Russian regime. Last year, in a television ad for Putin's third Presidential campaign, he said, 'One needs to be able to hold oneself presidentially, so that people reckon with the country. I don't know if it's fear? Respect? Reckoning.'"[17]

In December 2012, Gergiev sided with the Putin administration against the members of Russian band Pussy Riot and suggested that their motivation was commercial. He told the British newspaper The Independent, "I don't think this is anything to do with artistic freedom....Why go to the Cathedral of Christ to make a political statement? Why with screaming and dancing? You dont need to go to a place that is considered sacred by many people." He also said, "I am told by too many people that those girls are potentially a very good business proposition. Suppose that someone created all this in order to produce another touring group earning millions and millions? Anna Netrebko (acclaimed Russian soprano) didn't need to do something like this."[18] In The New Yorker, Alex Ross decried Gergiev's allegation by noting that "One member [of Pussy Riot] has been on a hunger strike in a prison camp."[17]

In New York City in 2013, the LGBT activist group Queer Nation interrupted performances by orchestras conducted by Gergiev at the Metropolitan Opera[19] and Carnegie Hall.[20] The activists cited Gergiev's support for Vladimir Putin, whose government had recently enacted a law that bans the distribution of "propaganda of non-traditional sexual relations" to minors, as the reason for their actions.[20] In London, anti-Gergiev demonstrations were led by the veteran activist, Peter Tatchell.[21]

In a public statement Gergiev replied, "It is wrong to suggest that I have ever supported anti-gay legislation and in all my work I have upheld equal rights for all people. I am an artist and have for over three decades worked with tens of thousands of people and many of them are indeed my friends."[22] This did not mollify all his critics; the novelist Philip Hensher tweeted: "Gergiev summarised: 'Some of my best friends are gay. I don't support institutional homophobia. I leave that up to my friend Putin.'"[23]

Writing in The Guardian, Mark Brown wrote, "Gergiev's case was not helped by comments he made to the Dutch newspaper Volkskrant on 10 September [2013]: 'In Russia we do everything we can to protect children from paedophiles. This law is not about homosexuality, it targets paedophilia. But I have too busy a schedule to explore this matter in detail.'"[24]

On 26 December 2013, the city of Munich, of whose Munich Philharmonic Gergiev is slated to become Music Director in 2015, made public a letter from Gergiev assuring them that he fully supports the city's anti-discrimination law and adding, "In my entire professional career as an artist, I have always and everywhere adhered to these principles and will do so in the future...All other allegations hurt me very much." [25]

In March 2014 he voiced support for Russia's military intervention in Ukraine.[26][27]

In 1999, Gergiev married the musician Natalya Dzebisova, who is 27 years his junior and also a native Ossetian. They have three children, two boys and a girl. From time to time he has been reported to be a friend of Vladimir Putin, and they have been said to be godfathers to each other's children.[28] But in a letter to The Daily Telegraph, he rejected the notion that he and Putin were each other's children's godfathers.[29]

Gergiev's recording of Prokofiev's Romeo and Juliet with London Symphony Orchestra on LSO live in 2010 was the winner of the Orchestral category and the Disc of the Year of the 2011 BBC Music Magazine Awards.[31]

This article incorporates information from the equivalent article on the Wikipedia.
Russian

This article uses material from the article Valery Gergiev from the free encyclopedia Wikipedia and it is licensed under the GNU Free Documentation License.

Emotions (A Song For You) Marc Anderegg
Update Required To play the media you will need to either update your browser to a recent version or update your Flash plugin.