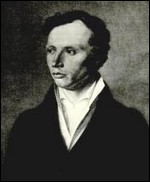 He was born in Tübingen, and studied jurisprudence at the university there, but also took an interest in medieval literature. Having graduated as a doctor of laws in 1810, he went to Paris for a few months; and from 1812 to 1814 he worked as a lawyer in Stuttgart, in the bureau of the minister of justice.

He had begun his career as a poet in 1807 and 1808 by contributing ballads and lyrics to Seckendorff's Musenalmanach; and in 1812 and 1813 he wrote poems for Kerner's Poetischer Almanack and Deutscher Dichterwald. In 1815 he collected his poems in a volume entitled Vaterländische Gedichte, which almost immediately secured a wide circle of readers. To almost every new edition he added some fresh poems. His two dramatic works Ernst, Herzog von Schwaben (1818) and Ludwig der Baier (1819) are unimportant in comparison with his Gedichte.

As a lyric poet, Uhland must be classed with the writers of the romantic school. Like them, he found in the Middle Ages the subjects which appealed most strongly to his imagination. Yet his style has a precision, suppleness and grace which distinguish his most characteristic writings from those of the romantics. Uhland wrote poems in defence of freedom, and in the states assembly of Württemberg he played a distinguished part as one of the most vigorous and consistent of the liberal members.

In 1829 he was made honorary professor of German literature at the University of Tübingen, but he resigned in 1833, when the post was found to be incompatible with his political views. In 1848 he became a member of the Frankfurt Parliament that convened in the course of the 1848 revolution.

One of his best known poems is "Ich hatt' einen Kameraden", which is an integral part of military funerals.

A town located south of Austin, Texas is name in his honor.

This article uses material from the article Ludwig Uhland from the free encyclopedia Wikipedia and it is licensed under the GNU Free Documentation License.