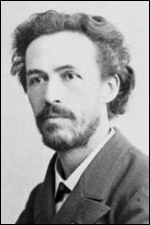 Godard was born in Paris in 1849. He entered the Conservatoire de Paris in 1863 where he studied under Henri Vieuxtemps (violin) and Napoléon Henri Reber (harmony) and accompanied Vieuxtemps twice to Germany.

In 1876, his Concerto romantique was performed at the Concerts Populaires, and other of his large works were also performed at these concerts. In 1878, Godard was the co-winner of the Prix de la Ville de Paris. His winning composition, a dramatic symphony entitled Le Tasso, remains one of his most admired works.

From that time until his death Godard wrote a large number of compositions. These include eight operas, among them: Jocelyn (the "Berceuse" from which remains Godard's best-known composition), performed in Paris in 1888; Dante, played at the Opéra-Comique two years later; and La Vivandière, left unfinished and completed by another hand. The last of these was heard at the Opéra-Comique in 1895, and has been played in England by the Carl Rosa Opera Company.

He became a professor at the Conservatoire de Paris in 1887, and was made a Chevalier (Knight) of the Légion d'honneur in 1889.

Among his piano pieces may be mentioned the 2nd Mazurka, the 2nd Valse, Au Matin, Postillon, En Courant, En Train, and Les Hirondelles. Florian's Song is also very popular and has been arranged for many instruments. One of Godard's sonatas for violin and piano contains a scherzo written in the unusual time signature of 5/8. He wrote more than 100 songs.

According to the Encyclopædia Britannica Eleventh Edition, "Godard's compositions are unequal, if only because his productivity was enormous. He was at his best in works of smaller dimensions. Among his more ambitious works, the Symphonie légendaire may be singled out as being one of the most distinctive."[1]

Godard was opposed to the music of Richard Wagner and also highly critical of Wagner's antisemitism. Godard's musical style was more in tune with those of Felix Mendelssohn and Robert Schumann.

Godard died in Cannes from tuberculosis in 1895, aged 45, and was buried at the family plot in Taverny.

This article uses material from the article Benjamin Godard from the free encyclopedia Wikipedia and it is licensed under the GNU Free Documentation License.

Ain't Misbehavin' Anthony Strong
Update Required To play the media you will need to either update your browser to a recent version or update your Flash plugin.