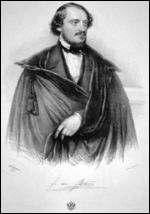 born on 27/4/1812 in Teutendorf, Mecklenburg-Vorpommern, Germany

Friedrich Adolf Ferdinand, Freiherr von Flotow (27 April 1812 – 24 January 1883) was a German composer. He is chiefly remembered for his opera Martha, which was popular in the 19th century and the early part of the 20th.

Born in Teutendorf, in Mecklenburg, into an aristocratic family, Flotow was French-trained. He studied at the Conservatoire de Paris and during this time came under the influence of Auber, Rossini, Meyerbeer, Donizetti, Halévy, and later Gounod and Offenbach. These influences are reflected in his operas, where a distinctive French opéra comique flavour exists.

He completed his first opera in 1835, Pierre et Cathérine, but his breakthrough came with Le naufrage de la Méduse (1839), based on the wreck of the warship Méduse. The three-act romantic opera Alessandro Stradella of 1844 is recognized as one of Flotow's finer works. Martha was first staged in Vienna at the Theater am Kärntnertor on 25 November 1847, and soon became one of the best-loved of all operas.

Between 1856 and 1863 Flotow served as Intendant of the court theatre at Schwerin. For most of his last years he lived in either Paris or Vienna,[1] and he had the satisfaction of seeing his operas mounted as far away as Saint Petersburg and Turin. He died in Darmstadt.

In all, Flotow wrote about 30 operas. Many of these works were performed in different versions and under different titles, in German, French and sometimes other languages. Some survive, some are lost. All but Martha have fallen into obscurity, and even Martha is not nearly as often performed now as it was a century ago, though it is still sometimes staged, and though there have been a number of attempts to revive other Flotow works (including Alessandro Stradella) during recent years.

The best-known single piece by Flotow is probably "Ach! so fromm, ach! so traut". This was added to Martha eighteen years after the Vienna premiere, and had been originally written for a different Flotow opera of 1846. It has been much recorded in its Italian version, "M’apparì tutt’amor".

This article uses material from the article Friedrich von Flotow from the free encyclopedia Wikipedia and it is licensed under the GNU Free Documentation License.