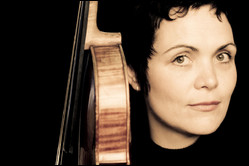 Tabea Zimmermann, born on 8 October 1966 in Lahr, (Germany), is a German violist.

She began learning to play the viola at the age of three, and commenced piano studies at age five. At the age of 13, she studied viola with Ulrich Koch at the Conservatory of Freiburg and progressed to study with Sándor Végh at the Mozarteum [1] University of Salzburg. She soon gained notice in international competitions, winning first prizes in Genève (1982), Budapest (1984), and the Maurice Vieux International Viola Competition in Paris (1983) for which she was awarded a superb instrument made by contemporary luthier Étienne Vatelot (1980) which she has played in her worldwide concert tours ever since.

As a soloist she has performed with numerous major orchestras, including the Leipzig Gewandhaus Orchestra, the Berlin Philharmonic Orchestra, the BBC Philharmonic, the Orchestre de la Suisse Romande, under the baton of noted conductors including Kurt Masur, Bernard Haitink, Christoph Eschenbach, Nikolaus Harnoncourt, and others.

Highly committed to the 20th and 21st century repertoire, she has attained noted success performing the “Sonata for Solo Viola” written for her by György Ligeti, premiering in 1994. Other contemporary composers who have written works for her include Heinz Holliger, Wolfgang Rihm, Georges Lentz, Bruno Mantovani, Sally Beamish, Enno Poppe and Josef Tal.

Since 2002, Tabea Zimmermann has been a professor of viola and chamber music at the Hanns Eisler Academy of Music [3] in Berlin. Previously she was on the faculty of the Saarbrücken Music Academy (1987-1989) and the Frankfurt University of Music and Performing Arts (1994-2002). Her artistic achievements and contributions have garnered her numerous national and international awards, including the Frankfurter Musikpreis, the Hessian Cultural Prize, and the International Prize of the Chigiana Music Academy of Sienna.

This article uses material from the article Tabea Zimmermann from the free encyclopedia Wikipedia and it is licensed under the GNU Free Documentation License.