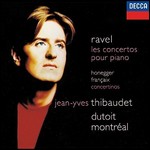 Jean-Yves Thibaudet was born in Lyon, France, to non-professional musical parents. His father played the violin, and his mother, of German origin and a somewhat accomplished pianist herself, introduced the instrument to Jean-Yves.

He has performed with most of the world's leading symphonic orchestras, including the Royal Concertgebouw Orchestra, the Chicago Symphony Orchestra, the Boston Symphony Orchestra, the Gewandhausorchester Leipzig, the Los Angeles Philharmonic, and the Orchestre National de France, among others. He also performs in the great concert halls of Europe and North America and is quite fond of travelling to Australia, where he has a strong fan base. He was inducted into the Hollywood Bowl Hall of Fame in 2010.[4] Thibaudet's virtuosity is such that he even impressed the great Vladimir Horowitz, who called a performance he heard on the radio of Thibaudet playing Liszt "amazing."[5]

Among his collaborators in performances and recordings are soprano Renée Fleming, mezzo-sopranos Cecilia Bartoli and Angelika Kirchschlager, violist Yuri Bashmet, violinists Joshua Bell and Julia Fischer, cellists Truls Mørk, Daniel Müller-Schott, and Gautier Capuçon, and the Rossetti String Quartet. He also commissioned a piano concerto from James MacMillan, which he premiered with the Minnesota Orchestra in 2011.[6]

Thibaudet has made more than 50 recordings, most for the British label Decca Records. His last album was a box set of all of Erik Satie's complete works for solo piano, released on the composer's 150th birthday.

He is particularly well-known for his interpretations of French classical music but has also made forays into the world of jazz as well, playing arrangements and transcriptions of improvisations on the CDs Conversations with Bill Evans (1997) and Reflections on Duke (1999).

Thibaudet is also known for his recordings of opera transcriptions. In 1993, he recorded arrangements of extracts from operas by Franz Liszt and Busoni. In 2007, Thibaudet released a CD entitled Aria: Opera Without Words, in which he selected several of his favorite arias and overtures, including some of his own transcriptions and those of Yvar Mikhashoff. He has since recorded a disc of Piano Concertos Nos 2 and 5 by Camille Saint-Saëns (with Dutoit and the Orchestre de la Suisse Romande, released in October 2007), and a disc of Gershwin works for piano and orchestra in Grofé's arrangements (released March 2010).[7]

His playing can be heard on the movie soundtracks of The Portrait of a Lady, Bride of the Wind, Pride & Prejudice, Extremely Loud and Incredibly Close,[9] Wakefield, and Atonement, the latter of which earned an Academy Award for Best Original Score.

He and his partner Paul have homes in Los Angeles and Paris and often travel together; Thibaudet will not accept invitations unless his partner is also invited.[10]

Thibaudet's concert attire is designed by Vivienne Westwood; he first asked her to design an outfit for his appearance at the London Proms in 2002.[7]

In 2001, the French Republic made Thibaudet a Chevalier de l'Ordre des Arts et des Lettres, and in 2012 he was elevated to the grade of Officier.[11]

This article uses material from the article Jean-Yves Thibaudet from the free encyclopedia Wikipedia and it is licensed under the GNU Free Documentation License.