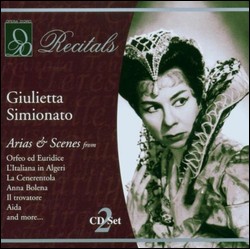 Born at Forlì, Romagna, she studied in Rovigo and Padua, and made her operatic debut at Montagnana in 1928. In 1928, she sang in Verdi's "Rigoletto."[1] The first fifteen years of her career were frustrating, she was only given small parts, but she attracted growing attention in the late 1940s, and by the end of her career was recognised as one of the most respected singers of her generation. In 1936, she made her debut at La Scala and appeared there regularly between 1936 and 1966. She made her debut at the Royal Opera House, Covent Garden in 1953, where she likewise appeared regularly between 1963 and 1965.

Simionato made her United States opera debut in 1953 as Charlotte in Jules Massenet's Werther at the San Francisco Opera with Cesare Valletti in the title role.[2] In 1959 she made her debut at the Metropolitan Opera, as Azucena in Il Trovatore, with Carlo Bergonzi, Antonietta Stella, and Leonard Warren.[3][4] Simionato also appeared at the Edinburgh Festival (1947), the San Francisco Opera (1953), the Teatro Nacional de São Carlos (1954), the Lyric Opera of Chicago (1954-1961), the Vienna State Opera (from 1956), and the Salzburg Festival. In 1957, she sang in Anna Bolena with Maria Callas.[5] In 1961, she withdrew from three performances at the Metropolitan Opera, with Trigeminal Neuralgia.[6]

Simionato had a large repertory including Rossini's Rosina and Cinderella, Charlotte in Werther, and Carmen. She also excelled in the Verdian repertoire, as Amneris, Eboli and Azucena, and as Santuzza in Mascagni's Cavalleria rusticana.

She was a major recording artist, and in addition many of her performances gained live radio broadcast or were captured on film. Fono has gathered her recordings on the CD, The Color of a Voice.[7] She retired in 1966, and married Dr. Cesare Frugoni.[8]

She continued to inspire admiration through teaching and various directorial positions, with amazing vitality even in her 90s. She was featured in Daniel Schmid's award-winning 1984 documentary film Il Bacio di Tosca (Tosca's Kiss) about a home for retired opera singers founded by Giuseppe Verdi. She also appeared in a hilarious interview by Stefan Zucker in Jan Schmidt-Garre's 1999 film, Opera Fanatic.

This article uses material from the article Giulietta Simionato from the free encyclopedia Wikipedia and it is licensed under the GNU Free Documentation License.

This one is for Bruno Stewy von Wattenwyl Trio
Update Required To play the media you will need to either update your browser to a recent version or update your Flash plugin.