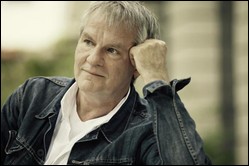 Reinhard Goebel (German: [ˈɡøːbəl]; born 31 July 1952 in Siegen, West Germany) is a German conductor and violinist specialising in early music on authentic instruments and professor for historical performance at the Mozarteum in Salzburg. Goebel received his first violin lessons at the age of twelve. He studied the violin with Franzjosef Maier, the leader of the Collegium Aureum, Saschko Gawriloff, an expert in difficult modern scores, and baroque violinists Marie Leonhardt in The Hague and Eduard Melkus in Vienna.

In 1973 Goebel founded his early music ensemble Musica Antiqua Köln that he led till its dissolution in 2007. He has been an important figure in early music and, for example, was instrumental in rediscovering the music of Johann David Heinichen and Jan Dismas Zelenka, court composers in Dresden.

He plays the violin left-handed (that is, reversed from the usual set-up) since some problems with his left hand meant he had to switch sides after he had already learnt the violin right-handed.

This article uses material from the article Reinhard Goebel from the free encyclopedia Wikipedia and it is licensed under the GNU Free Documentation License.