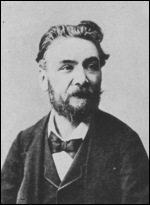 Ernest Guiraud (French pronunciation: [gio]; 26 June 1837 – 6 May 1892) was a French composer and music teacher born in New Orleans, Louisiana. He is best known for writing the traditional orchestral recitatives used for Bizet's opera Carmen and for Offenbach's opera Les contes d'Hoffmann (The Tales of Hoffmann).

Guiraud began his schooling in Louisiana under the tutelage of his father, Jean-Baptiste-Louis Guiraud, who had won the Prix de Rome in 1827. At age 15, he set a full-length libretto about King David to music that he and his father had found on a trip to Paris. The result was David, an opera in three-acts, which had a resounding success at the Théâtre d'Orléans in New Orleans in 1853, sealing his future.

In December of the same year, Guiraud sailed back to France to continue his musical education. He studied piano under Marmontel and composition under Halévy at the Paris Conservatoire. Remarkably gifted as a student, he was awarded first prize for piano in 1858. He won the Prix de Rome the next year, notably, the only instance of both father and son obtaining this prize. He became close friends with Camille Saint-Saëns, Emile Paladilhe, Théodore Dubois, and especially Georges Bizet.

Guiraud entered his profession by writing one-act stage works that served as "curtain raisers" for evenings of theatrical entertainment. His first important stagework, Sylvie, which premiered at the Opéra Comique in 1864, was a popular success and established his reputation in Paris. In August 1870, the impact of the Franco-Prussian War hit Paris while his opéra-ballet Le Kobold was only 18 days into its run. All of the theaters closed their doors. Guiraud enlisted in the infantry and fought for France to the war's end in 1871.

Although Guiraud's primary interest was the composition of operas, most of them were not a success. Madame Turlupin (1872) was a succès d'estime, but it was hampered by an old-fashioned libretto. Piccolino, his three-act opéra comique first performed in 1876, represents the peak of his career. An appealing sorrentino sung by Célestine Marié, known as Galli-Marié, and a brilliant and effective ballet entitled Carnaval (a movement from his "First Orchestral Suite") enabled the work achieve a long run. However, the opera was never revived.

After Bizet's death, Guiraud collected Bizet's original scores and arranged the frequently performed L'Arlésienne Suite No. 2. He also arranged twelve numbers from Bizet's opera Carmen into two Carmen Suites. Guiraud is perhaps most famous for constructing the recitatives both beloved and criticized that replaced the spoken dialogue in performances of Carmen for more than a century. He also wrote the recitatives and completed the score of Jacques Offenbach's masterpiece Les contes d'Hoffman (The Tales of Hoffmann) which was left unfinished at Offenbach's death. Guiraud's version was very popular but it was not exclusively performed because Offenbach left an enormous number of sketches that various composers and arrangers have used to make their realisations of the opera.

The amount of Guiraud's own musical output is small, probably due to his desire to help his friends as well as demands from his teaching career. Of his compositions in other forms, his ballet Le Forgeron de Gretna Green, given at the Salle Le Peletier of the Paris Opéra (5 May 1873), Caprice for violin and orchestra (1885), and Chasse fantastique, a symphonic poem (1887), are best known.

Beginning in 1876, Guiraud taught at the Paris Conservatoire. He was a founding member of the Société Nationale de Musique and the author of an excellent treatise on instrumentation. In 1891, Guiraud was elected member of the Académie des beaux-arts and was appointed professor of composition at the Conservatoire to replace Victor Massé. Guiraud's teaching methods for harmony and orchestration were highly respected and recognized in musical circles. His musical theories had a strong and beneficial influence on Claude Debussy, whose notes were published by Maurice Emmanuel in his book devoted to Pelléas et Mélisande. André Bloch, Mélanie Bonis, Paul Dukas, Achille Fortier, André Gedalge and Erik Satie are also counted among his students.

Guiraud devoted the years 1891 and 1892 to completing the orchestration for Kassya, a five-act opera by Léo Delibes. However, it was left unfinished due to his own death in Paris at age 54.

This article uses material from the article Ernest Guiraud from the free encyclopedia Wikipedia and it is licensed under the GNU Free Documentation License.

C Jam Blues Duke Ellington Orchestra & Paul Gonsalves
Update Required To play the media you will need to either update your browser to a recent version or update your Flash plugin.