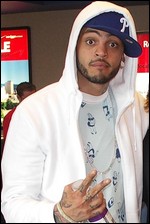 Travis Lazarus "Travie" McCoy (born August 5, 1981) is the lead vocalist of the alternative hip-hop band Gym Class Heroes. He released his first solo album, Lazarus, on June 8, 2010. The lead single from the album, "Billionaire", peaked at #4 on the Billboard Hot 100 and #3 on the UK Singles Chart.

McCoy was born and raised in Geneva, New York.[1][2] His father is Haitian-born Italian and his mother is of Limerick Irish, Filipino and Native American ancestry.[3] In high school, he met future bandmate Matt McGinley in his gym class and the two bonded over a common interest in music, mostly punk rock, indie rock and hip hop. They decided to start a band and played with other musicians until Gym Class Heroes was formed in 2001.[4]

Travis made his MTV debut in the summer of 2002, as he appeared on stage at the beach house, winning a standard nation-wide MC Battle that was held on the MTV show Direct Effect.[5]

After the addition of guitarist Disashi Lumumba-Kasongo and bassist Eric Roberts, Gym Class Heroes was signed to Fueled By Ramen and Decaydance Records, Fall Out Boy's bassist, Pete Wentz's, own independent record label. On the label, the band released the gold-selling album As Cruel as School Children. Since that release, the band's single "Cupid's Chokehold" reached #3 on the UK Singles Chart and #4 on the Billboard Hot 100. "Clothes Off!!" and "Cookie Jar" peaked at #5 and #6 on the UK Singles Chart. They have collaborated with Fall Out Boy's Patrick Stump on numerous occasions, notably for providing backing vocals on the song "Cupid's Chokehold". Stump also produced the majority of their album The Quilt, which was released on September 9, 2008 and peaked at #14 on the U.S. Billboard 200 chart and #41 on the UK Albums Chart.

In 2009, McCoy remixed the Bring Me the Horizon song Chelsea Smile for their remixes album, Suicide Season: Cut Up!.

In July and August 2010, Travie supported Rihanna on some of the North American dates of her Last Girl on Earth Tour.[6]

Travie McCoy has recently released the hit single 'Billionaire' with Bruno Mars, which has been successful in Europe and the U.S since its release in early May 2010. McCoy released his first solo album, Lazarus on June 8, 2010. The album debuted at number 25 on the U.S. Billboard 200 chart with sales of 15,000 copies.[7] On 21 August 2010 Lazarus was released in Europe and entered the UK Album Charts at number 69, this is the albums peak position as far.[8] "Need You" was the second single from the album in the U.S, released in September 2010. "We'll Be Alright" was released on October 25, 2010 as the second single in the U.K, and has already been featured in the trailer of Yogi Bear.[6]

Through October and November, McCoy will commence on a 13-date tour of Europe, along with Bruno Mars. They played five dates in the U.K, four in Germany and 1 in Holland, Denmark, Sweden and France.[6]

Travie McCoy performed at the 2010 MTV VMAs on Sept. 12, 2010 on the main stage before the program cut to a performance by N.E.R.D. [10] McCoy will be part of the Summerbeatz tour held in Australia alongisde, Flo Rida, Jay Sean and Soulja Boy in November 2010.

McCoy is featured on the teen-pop female singer Jessica Jarrell's debut single "Up and Running" official remix, which will be featured on the singer upcoming debut album under Island Records.[12]

Travie Mccoy is also featured on Livin's "City Of Brotherly Love" album, scheduled to be released in early 2011 on 700 Level Entertainment. The track "When I Approach" features Livin, Travie Mccoy and Joe Budden, and is produced by Sev-One. There was a video released on You Tube showing Travie recording this song and it will finally be available in 2011.

In middle 2010 he worked with producer Starsmith and british singer Cheryl Cole for her upcoming album. However he is featured on the track "Yeah Yeah" of Cheryl Cole's upcoming album Messy Little Raindrops, set to be released on November 1st.[13]

Also McCoy runs his own music imprint called "The Bat Squad" wich consists of Tim William, Nicholas Scimeca, Tequila Mockingbird, and himself. The producer Jeff "Stress" Davis is affilliated to the imprint. McCoy with Nicholas Scimeca formed the duo "Tequila Mockingbird" wich is also signed under Decaydance Records, and they are working in a project, recently they released two songs titled "Brooklyn Basement" and "Snow Globe".[14]

In early March 2008, McCoy opened up about his battles with opioids. He stated that he had been addicted to pharmaceuticals since he was 15 years old.[15]

McCoy was arrested on July 2, 2008, after hitting a man on the head with his microphone. The man had been in the crowd at a concert in St. Louis when he shouted racial slurs at McCoy.[16] McCoy asked the man, "What did you just call me?" As security was removing the man from the venue, McCoy brought the man on stage to call him out in front of the crowd. In a statement, McCoy's publicist said that the man hit McCoy's knee, which was in a brace after he had suffered a recent strain.[16]

McCoy dated singer Katy Perry on and off for several years. He had given a promise ring to Perry,[17] and when asked if this was rehearsal for an actual proposal, McCoy shrugged with a grin. The two broke up in December 2008.[18] They began dating again in April 2009.[19] However, they broke up once more a few months later. McCoy is allegedly the subject of Perry's song "Circle The Drain", from her 2010 Teenage Dream album.[20]

This article uses material from the article Travie McCoy from the free encyclopedia Wikipedia and it is licensed under the GNU Free Documentation License.

Blues For Juanita MJQ feat. Jimmy Heath
Update Required To play the media you will need to either update your browser to a recent version or update your Flash plugin.