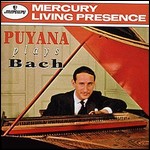 Puyana was born in Bogotá in 1931, and began piano lessons at age 6 with his aunt and at age 13 made his debut at the Teatro Colón in Bogotá. When he was 16, he went to Boston to continue his piano studies at the New England Conservatory. He subsequently studied harpsichord with Wanda Landowska and musical composition with Nadia Boulanger in Paris.

Puyana made his harpsichord début in New York in 1957. In 1961, he débuted in Boston in the Peabody Mason Concert series.[3] One reviewer was so impressed by his performance, the sub-headline read: "Without any doubt, Rafael Puyana's recital at Jordan Hall last night was by far the greatest program of harpsichord music I have ever heard".[4] He made his London debut in 1966.

Puyana performed with Yehudi Menuhin, Leopold Stokowski and Andrés Segovia. Composers Federico Mompou and Xavier Montsalvatge dedicated compositions to him - in Mompou's case, No. 11 of his Cançons i Danses.

Puyana taught such artists as Christopher Hogwood and Elizabeth de la Porte. He also collected historical instruments such as a 3-manual harpsichord made in 1740 by H.A. Hass.

This article uses material from the article Rafael Puyana from the free encyclopedia Wikipedia and it is licensed under the GNU Free Documentation License.

Sa Blouse Jean-Pierre Pasquier
Update Required To play the media you will need to either update your browser to a recent version or update your Flash plugin.