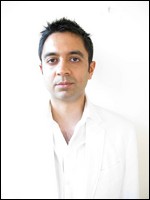 Vijay Iyer (born October 26, 1971) is a jazz pianist, composer, bandleader, producer, electronic musician, and writer based in New York City, USA. He became a professor of music at Harvard University in early 2014.[1]

Born in Albany, New York and raised in Fairport, New York,[2] Vijay Iyer is the son of Indian Tamil immigrants to the US.[3] He received 15 years of Western classical training on violin beginning at the age of 3. He began playing the piano by ear in his childhood, and is mostly self-taught on that instrument.[3] After completing an undergraduate degree in mathematics and physics at Yale University, Iyer went to the University of California, Berkeley, initially to pursue a doctorate in physics. Iyer continued to pursue his musical interests, playing in ensembles led by drummers E. W. Wainwright and Donald Bailey. In 1994 he started working with Steve Coleman and George E. Lewis. In 1995 he left the physics department and assembled an interdisciplinary Ph.D. program in Technology and the Arts, focusing on music cognition. His 1998 dissertation, titled Microstructures of Feel, Macrostructures of Sound: Embodied Cognition in West African and African-American Musics,[4] applied the dual frameworks of embodied cognition and situated cognition to music.

Now in the presentment of bravura, Iyer performs around the world with ensembles including his Grammy-nominated trio with Stephan Crump and Marcus Gilmore; the experimental collective Fieldwork, featuring Steve Lehman and Tyshawn Sorey; the new South Asian chamber trio Tirtha, featuring guitarist Prasanna and tabla player Nitin Mitta; his large-scale works with poet-performer Mike Ladd; and Raw Materials, his longstanding duo with saxophonist Rudresh Mahanthappa. His trio album Historicity was nominated for a 2010 Grammy for Best Instrumental Jazz Album, and was named #1 album of the year in more than one publication, including the Downbeat Magazine International Critics Poll, the Village Voice Annual Jazz Critics Poll, the New York Times, Los Angeles Times, Chicago Tribune, Detroit Metro Times, PopMatters, and others. His trio won the 2010 Jazz Echo Award (aka the "German Grammy") for best international ensemble. Iyer was named the 2010 Musician of the Year by the Jazz Journalists Association.

In 2003, Iyer premiered his first collaboration with poet-producer-performer Mike Ladd, titled In What Language?, a song cycle about airports, fear and surveillance before and after 9/11, commissioned by Asia Society. Iyer's next project with Ladd, Still Life with Commentator, a satirical oratorio about 24-hour news culture in a time of war, was co-commissioned by UNC-Chapel Hill and by Brooklyn Academy of Music for its 2006 Next Wave Festival, and was released on cd by Savoy Jazz. Their third major collaboration, Holding it Down, focuses on the dreams of young American veterans from the 21st century wars in Iraq and Afghanistan, and was commissioned by Harlem Stage to premiere in 2012.

Iyer's composition Mutations I-X was commissioned and premiered by Ethel (string quartet) in 2005. His orchestral work Interventions was commissioned and premiered in 2007 by the American Composers Orchestra conducted by Dennis Russell Davies. Iyer co-created the award-winning score for Teza (2009), by the celebrated filmmaker Haile Gerima, and also collaborated with filmmaker Bill Morrison on the award-winning short film and audiovisual installation Release, commissioned by Eastern State Penitentiary (2009). In 2011 he created Mozart Effects, commissioned by Brentano String Quartet as a response to an unfinished fragment by Mozart, and he also created and performed the score to UnEasy, a ballet choreographed by Karole Armitage and commissioned by Central Park Summerstage. In 2012 the Silk Road Ensemble debuted his commissioned piece, Playlist for an Extreme Occasion.

Iyer received the 2003 Alpert Award in the Arts, a 2006 Fellowship from New York Foundation for the Arts, and commissioning grants from the Rockefeller Foundation, the New York State Council on the Arts, Creative Capital, the Cary Charitable Trust, American Composers Forum, Chamber Music America, and Meet The Composer. He was named one of the "50 most influential global Indians" by GQ India, and he received the 2010 India Abroad Publisher's Award for Special Excellence. He was awarded the 2012 Greenfield Prize for Music. He was awarded a 2013 Trailblazer Award by the Association of South Asians in Media, Marketing and Entertainment (SAMMA) for his outstanding contributions to the worlds of Music and Jazz. He is a 2013 recipient of a MacArthur genius grant.[5]

This article uses material from the article Vijay Iyer from the free encyclopedia Wikipedia and it is licensed under the GNU Free Documentation License.