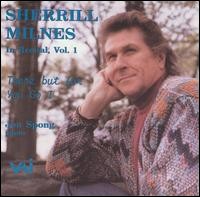 Sherrill Milnes (born January 10, 1935) is an American dramatic baritone most famous for his Verdi roles. From 1965 until 1997 he was associated with the Metropolitan Opera. His voice is a high dramatic baritone, combining good legato with an incisive rhythmic style. By 1965 he had made his debut at the Metropolitan Opera. His international debuts followed soon thereafter, and Milnes became one of the world's prominent Verdi baritones of the 1970s and 1980s.

Milnes was born in Downers Grove, Illinois. His mother and father were dairy farmers. As a child, he exhibited strong and varied musical talents. In addition to singing, he also played piano, violin, viola, double bass, clarinet, and tuba. Although his interests did not always lean toward opera, he spent many hours singing to his father's cows and was once found on a tractor practicing an operatic laugh.

While in high school, Milnes planned to be an anesthesiologist, but later returned to music, studying music education at Drake University and Northwestern University, with the idea of becoming a teacher. He attended North Central College before transferring to Drake University and Northwestern University. Milnes was awarded an honorary doctorate from North Central College in 2006. After graduating from Drake, he spent a summer as an apprentice at the Santa Fe Opera and thereafter dedicated himself to becoming an opera singer, studying briefly with the famed soprano Rosa Ponselle.

Milnes began his career with the Opera Company of Boston in 1960, joining Boris Goldovsky's Opera Theater, and debuting as Masetto in Don Giovanni. From very early on in his career, Milnes was managed by well-known talent manager Herbert Barrett. In 1961, he made his debut at Ponselle's Baltimore Opera as Gérard in Andrea Chénier.

In 1964, Milnes made his first major breakthrough singing the role of Valentin in Gounod's Faust at the New York City Opera (opposite Norman Treigle as Mephisto), the role with which he also made his Metropolitan Opera debut in 1965. In 1967 he created the role of Captain Adam Brant in the world premiere of Marvin David Levy's Mourning Becomes Electra at the Met.

In 1964, Milnes also made his European debut singing Figaro from The Barber of Seville at the Teatro Nuovo in Milan. However, it was his performance as Miller in Verdi's Luisa Miller in 1968 which catapulted him into international fame. Milnes was the leading baritone at the Met during the 1970s, singing to great acclaim there, especially for his performances in Verdi operas.

Beginning in 1982, Milnes experienced serious vocal health problems which took him some time to surmount. In 1984, he sang in the world premiere of Act I of Sergei Rachmaninoff's opera Monna Vanna, which had been left in piano score by the composer and orchestrated by Igor Buketoff.

Milnes' talents were not confined, however, solely to the operatic stage. As early as 1971 he had already received critical acclaim while featured in the role of David during the premier of Ezra Laderman's opera And David Wept, on the CBS Television network, under the musical direction of Alfredo Antonini. Nearly a decade earlier in 1964 he also collaborated with Antonini playing the role of Saint Joseph in a televised adaptation of Hector Berlioz's sacred oratorio L'enfance du Christ.[1] [2] [3] [4]

Milnes was awarded Phi Mu Alpha Sinfonia fraternity's Charles E. Lutton Man of Music Award at its 1982 national convention in Urbana, Illinois. He had been initiated into the Fraternity's Alpha Beta chapter at Drake University in 1954. In the same year was honored by the Italian government as "Commendatore Ordine al Merito della Repubblica"[5]

On July 5, 1986, he performed on the New York Philharmonic's tribute to the 100th anniversary of the Statue of Liberty, which was televised live by ABC.[6] The orchestra, conducted by Zubin Mehta, performed in Central Park.

In September 1996, Milnes was honored by the French government with the distinguished Chevalier de l'Ordre des Arts et des Lettres.[7] After 32 years and 653 performances, he made his final bow at the Metropolitan on March 22, 1997 in Aida.[8]

Milnes is currently a professor emeritus in voice at Northwestern University. He is a recipient of Yale University's Sanford Medal.[9]

Milnes was inducted as a Laureate of The Lincoln Academy of Illinois and awarded the Order of Lincoln (the State’s highest honor) by the Governor of Illinois in 2003 in the area of The Performing Arts.[10]

Milnes has been a resident of Cresskill, New Jersey, and currently resides in Palm Harbor, Florida with his wife and son, Theo.[11]

In 2001, Milnes and his wife, soprano Maria Zouves, founded the VOICExperience Foundation, a non-profit organization for the education of young singers. It evolved from a series of master classes led by Milnes, Tony Randall, Martina Arroyo and Barry Tucker, president of the Richard Tucker Music Foundation. Based in Florida, it provides several educational programs, workshops, outreach events and community enrichment programs. In Florida, the foundation runs The Florida VOICE Project for singers in the Tampa Bay Area. In New York City, the foundation runs the Opera As Drama program, a week-long career development program for emerging professional opera singers which culminates in a public performance at Opera America's National Opera Center. As part of the Savannah Voice Festival, the foundation runs a Teen VOICE workshop and the Milnes VOICE studio.[12]

This article uses material from the article Sherrill Milnes from the free encyclopedia Wikipedia and it is licensed under the GNU Free Documentation License.